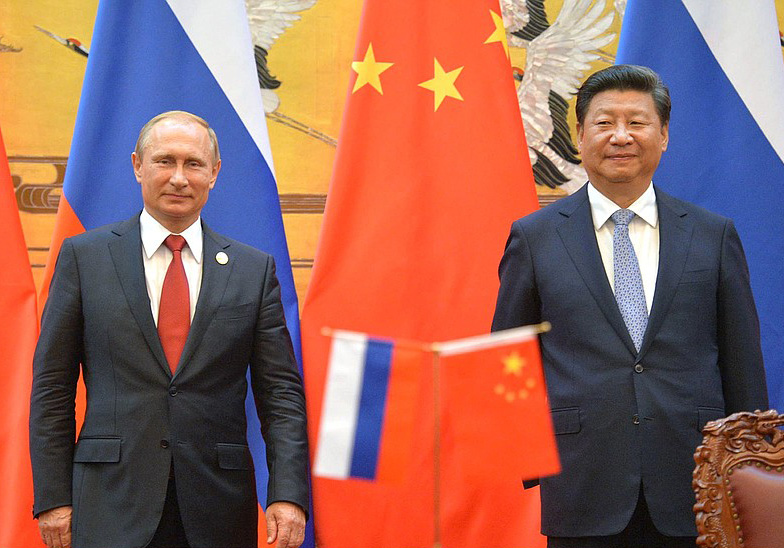 Moscow and Beijing lashed out Friday at Washington’s new anti-Russian sanctions that also target China for the first time, warning the United States could face consequences.

President Vladimir Putin’s spokesman accused Washington of playing unfairly and using new measures to squeeze Moscow out of the global arms market, after the United States slapped sanctions on China for buying Russian warplanes and missiles and threatened to target its other clients.

“This is unfair competition, dishonest competition, an attempt to use non-market methods that run counter to norms and principles of international trade to squeeze the main competitor of US makers out of the markets,” said Kremlin spokesman Dmitry Peskov.

Peskov said that “Washington’s continued sanctions hysterics” dealt a new blow to US-Russia ties but could not immediately say if Moscow would retaliate, or how.

On Thursday, Washington placed financial sanctions on the Equipment Development Department of the Chinese Defence Ministry, and its top administrator, for its recent purchase of Russian Sukhoi Su-35 fighter jets and S-400 surface-to-air missile systems.

It was the first time a third country has been punished under the CAATSA sanctions legislation for dealing with Russia, signalling Donald Trump’s readiness to risk relations with other countries over Moscow.

Beijing — which is locked in a trade war with the United States — urged Washington to withdraw sanctions or “bear the consequences”.

“The US actions have seriously violated the basic principles of international relations and seriously damaged the relations between the two countries and the two militaries,” said Chinese foreign ministry spokesman Geng Shuang.

“We strongly urge the US to immediately correct their mistake and withdraw their so-called sanctions, otherwise the US will have to bear the consequences.”

United in their resentment of America’s global influence, China and Russia have sought in recent years to tighten up their ties and this month conducted week-long joint military drills, Moscow’s largest ever war games.

Russian Foreign Minister Sergei Lavrov warned that Russia would act to end its dependency on the US dollar.

“We will do everything to stop being dependent on the countries who behave towards their partners in this way,” Lavrov said on a visit to Sarajevo.

“It would be good for them to remember there is such a concept as global stability which they are thoughtlessly undermining by whipping up tensions in Russian-American ties,” said Ryabkov.

“Playing with fire is silly, it can become dangerous,” he said in a statement, noting the latest round of anti-Russian measures was the 60th since 2011.

Arms exports are an important source of revenue for the country and last year Russia sold more than $14 billion worth of arms overseas.

US officials said that the US could consider similar action against other countries taking delivery of Russian fighter jets and missiles.

Turkey, which is embroiled in a dispute with Washington over the detention of a US pastor, is in talks to buy S-400 missile systems from Russia.

Alexander Gabuev, head of the Russia in the Asia-Pacific Program at the Carnegie Moscow Center, said the new US measures could bring Moscow and Beijing even closer.

“The move is very unlikely to stop growing arms trade between Moscow and Beijing,” he said on Twitter.

Analysts say the latest US sanctions could push Russia and China even closer. Russia’s President Vladimir Putin and his Chinese counterpart Xi Jinping had a friendly meeting earlier this month in Vladivostok

All of them — defence related firms, officers of the GRU military intelligence agency, and people associated with the Saint Petersburg-based Internet Research Agency disinformation group — have been on previous US sanctions lists.

Twenty eight of them have already been indicted by Robert Mueller, the US Special Counsel who is investigating election meddling by Russia.

A senior US administration official, speaking on condition of anonymity, insisted the ultimate target was Russia and not “the defence capabilities” of third countries.

CAATSA, or the Countering America’s Adversaries Through Sanctions Act, was passed in 2017 as a tool that gives Washington more ways to target Russia, Iran and North Korea with economic and political sanctions.

The US official said Washington had spent “an enormous amount of time” seeking to discourage prospective buyers of Russian arms.

The new sanctions came as the United States and China are in the heat of a trade war.

The two countries will launch new tariffs on Monday, with Washington targeting $200 billion in Chinese exports and Beijing hitting $60 billion worth of American products.