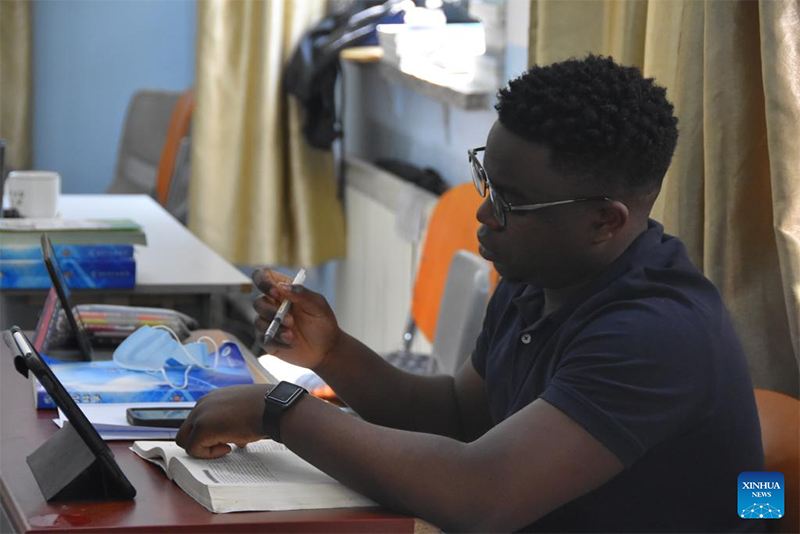 Zimbabwean student George Tabengwa has been studying medicine in northwest China’s Xinjiang Uygur Autonomous Region for about four years, and one thing has remained constant during that time.

“My first impression of Xinjiang is also the lasting impression: a safe, free, beautiful and diverse place,” said the 24-year-old.

Now a senior student at Xinjiang Medical University in Urumqi, the regional capital, Tabengwa began his ties with Xinjiang in 2018. He obtained a full scholarship to study clinical medicine at the university after completing preparatory courses in China’s Shandong Province.

He knew little about Xinjiang at that time, aside from some sensational reports from Western news organizations. “After I came to Xinjiang, I found that these reports are untrue,” he said.

“I didn’t see any problems here. The place is safe. Everyone is free to do what they want to do,” said Tabengwa. “I also enjoy my studies and life here, including diverse cultures and easy access to different kinds of food.”

Among the key attractions for the student is the region’s ethnic and cultural diversity.

“My classmates come from different ethnic groups in China. They often teach me to speak their dialects and we have much fun together,” Tabengwa said.

Tabengwa feels that the people of Xinjiang are united in working for a better life. “It’s a very fair place,” he said. “If you work hard and are diligent, you’re definitely going to get your opportunity and become successful.”

The Zimbabwean student has visited many places in Xinjiang and now considers himself a Xinjiang local. “We foreign students are free to visit any city,” he said. “I have been to places like Korla, Turpan and Hotan. I rode a camel in Turpan for the first time in my life, which was a really unforgettable experience.”

Due to the COVID-19 epidemic, several foreign students in the university have returned to their home countries, but Tabengwa chose to stay.

“My family also wanted me to leave, but I didn’t want to risk my studies,” said Tabengwa. “The result proved I made the right decision. Everything is going well so far, and I haven’t experienced any disruption to my studies.”

He said that his family now knows a lot about Xinjiang. “I often tell them of my experiences here and they love the place as much as I do. My siblings hope to come to Xinjiang or other Chinese regions to study if they get the opportunity.”

As for his future plans, Tabengwa said he is due to start his internship at a local hospital in September.

“I’m also planning to apply for a master’s degree in neurosurgery or cardiothoracic surgery in China,” he said. “I would like to stay here longer.”