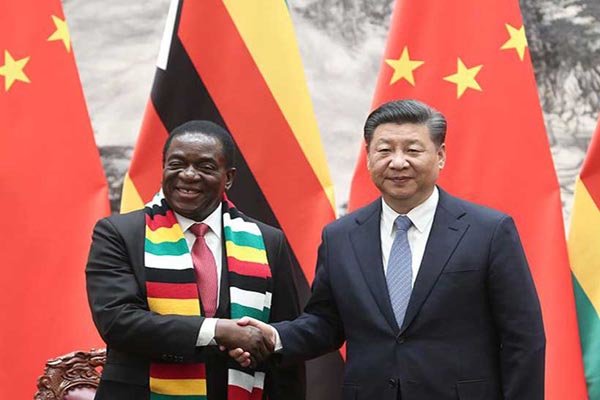 China and Zimbabwe celebrate 40 years of diplomatic relations on Saturday, the same day that the southern-African country commemorates its 40 years of independence.

China became the first country to open a diplomatic mission in the newly independent state in 1980, and the relations between China and Zimbabwe were upgraded from all-weather friends to a comprehensive strategic partnership in 2018.

The 40 years have seen both countries standing together not only on the political front, but also in other fields.

In the face of the deadly COVID-19 pandemic, China has provided assistance to the African country and mobilized the Chinese community there to help rehabilitate the country’s quarantine and treatment facility.

Wilkins Hospital in the capital Harare has been modernized and with assistance from Zimbabwean companies, individuals and the local Chinese community, it can now accommodate 60 COVID-19 patients and has 10 intensive care unit beds, which can handle most of the country’s COVID-19 cases.

“We are now happy that we have proper ICU beds and proper state-of-the-art ventilators … we can save more lives now,” said Health Director of Harare City Council Prosper Chonzi.

In the past two decades, China and Zimbabwe have enhanced cooperated under such frameworks including the Forum for China-Africa Cooperation, and engaged in projects on a win-win basis.

China has cooperated with Zimbabwe in infrastructural projects in various sectors of the Zimbabwean economy, which have advanced the wellbeing of Zimbabweans.

An upgrade project at Kariba South Hydro Power Station was completed in 2018. The expansion of Hwange Thermal Power Station will add nearly 700 megawatts into the national power grid by 2022.

Moreover, China has built schools in some communities and has always been ready to help drought and flood victims throughout the country by providing food and other technical support.

The upgrading of China-Zimbabwe Friendship Hospital in Mahusekwa, Marondera District, has become one of the best symbols of China-Zimbabwe friendship and cooperation. The 129-bed facility, which started receiving patients in 2013, is now being expanded to offer more services to patients, including specialist referrals.

Since Zimbabwe joined the Belt and Road Initiative (BRI) proposed by China in 2013, the African country has benefited from the opening up of participating economies and the creation of trade links and networks with the rest of the world.

Pro-Vice-Chancellor of University of Zimbabwe Pedzisai Mashiri said that the BRI has provided equal and inclusive opportunities for Africa and Zimbabwe.