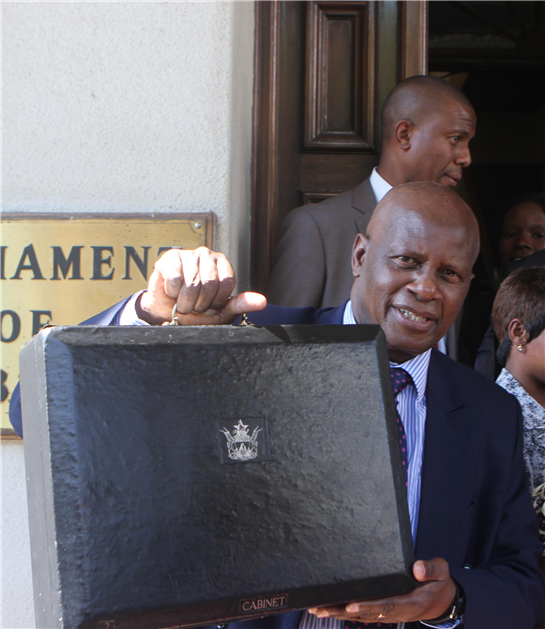 IMBABWE’S country’s GDP is seen flat at 3,2 percent next year with key sectors such as mining, tourism likely to register modest growth, finance minister Patrick Chinamasa said as he presented a $4.1 billion national budget on Thursday.
Government expects to collect $4.1 billion in revenue against expenditure of $ 4.115 billion. In Addition, it also expects $394 million in development assistance as well as up to $552 million in loans.
Chinamasa said recurrent expenditure will continue to dominate government’s expenditure at 92 percent leaving very little for capital expenditure.
Next year, exports are seen registering a five percent increase to $3.83 billion with imports falling to $6.15 billion from over $8 billion this year.
Between January and October exports amounted to $2.4 billion while imports cost $5.3 billion in the same period.
Between January and September, government collected revenue of $2.73 billion against a target of $2.9 billion. About 82 percent of this was gobbled up by employment costs.
Chinamasa said the mining sector is projected to grow by 3.1 percent growth driven by nickel and gold while the ICT and transport sectors are seen to grow by 6.4 percent and 2.9 percent respectively.
He said prospects for 2014/15 agricultural season remained positive with $253 million having already been mobilised for the presidential input scheme.
2015 budget highlights

Economy to grow 3.2 percent (2014:3.1pct)
Inflation to remain below 1 percent in 2014 and subdued in 2015
Govt to collect $4.1 billion revenue against expenditure of $4.115 billion
Govt to collect $3,93 billion by 2014 year-end
2015 recurrent expenditure seen at 92 percent
Employment costs to chew 82 percent ($3,2 billion) of 2014 budget
Mining sector to grow by 3.1 percent, ICT by 6.4 percent and Transport by 2.9 percent
Exports expected to reach $3,83 billion in 2015
Imports seen at $6.15 billion
Tax free threshold increased to $300 per month from $250
Tax amnesty extended to 15 months from six months
Excise duty on cigarettes increased to $20/1,000 sticks from $15/1,000 sticks
Excise duty on clear beer reduced to 40pct from 45pct
Govt to impose tax on imported doughs, buns and bread
Corporate tax on exporting companies to be lowered by between 15 and 30pct
Royalties on firms selling to local diamond and cutters polishers to be scrapped
Agriculture to grow by 3,4 percent, govt to mobilise $252 mln for presidential inputs programme
Tourism sector to grow by 4.7 percent (2014: 3.9 percent)