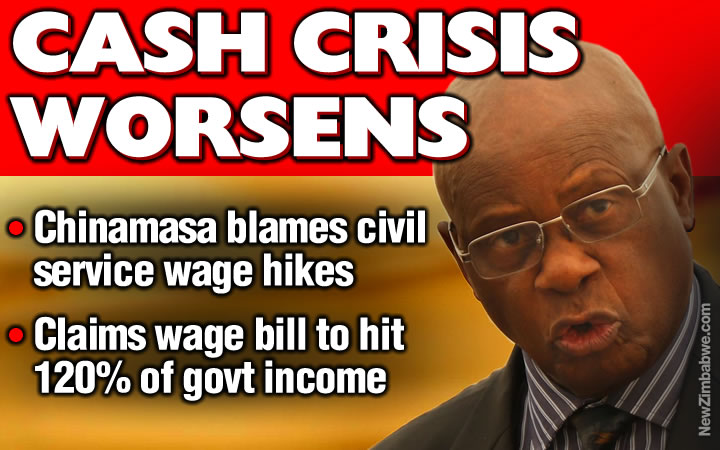 If there any civil servants here I want them to hear this loud and clear; for every $100 we receive 90% is going to wages. I will not be surprised that it is going to shoot up to 120%.”

He was speaking at a meeting called Friday between women’s groups and President Emmerson Mnangagwa.

Responding to questions on the cash shortages Zimbabweans have endured since 2016, Chinamasa offered little by way of hope for a respite.

“For as long as we are using the United States dollar as our currency and the little exports from the country, it will be difficulty to have enough to solve the country’s cash crisis,” he said.

“We are not getting as much foreign direct investments as we should, but the indications are that this is going to improve as we go into the future but currently that is not so.”

“We are not getting lines of credit and we have not had any line of credit from Europe in the last 20 years and we have happy that for the first time we have received a loan of $100 million loan from British government.”

And the recent 15 percent pay hike for government workers to prevent politically damaging strikes ahead of crunch elections in two months will only worsen the situation.

“Another problem causing cash shortages is the fact that we have a huge fiscal debt,” he said.

“For every $100 we receive from taxes 90% is going to wages. This is for civil servants and I want them to hear this.

“The situation is going to be made worse because of the allowances adjustments to nurses, teachers, doctors and the rest of the civil service. I will not be surprised that it is going to shoot up to 120%.”

He added; “People expect the over $300 million every month to be matched with physical cash.

“(But) we cannot match that because we run the risk of hyper-inflation like we had in 2009 and government is not prepared to go that route.”