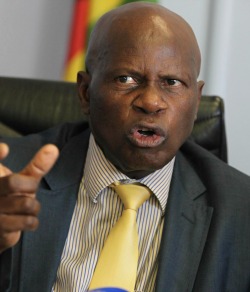 ZIMBABWE is looking for advice from the African Development Bank (AfDB) on how to mortgage its vast mineral resources to raise money and shore up an economy that has slowed since the start of the year, the new finance minister said on Friday.
The country has the second-largest platinum reserves in the world after South Africa, one of the biggest diamond deposits and large quantities of coal and gold, but has grappled with a weak economy critics blame on veteran President Robert Mugabe’s nationalist policies.
Growth is forecast at 3.4% this year, down from a previous projection of 5%, with prospects weighed down partly by jitters over a July 31 election won by Mugabe amid charges of fraud by the opposition.
Zimbabwe had also asked the AfDB to help the country re-engage Western financial institutions that have suspended support, and find ways to clear its $10bn foreign debt, Finance Minister Patrick Chinamasa said.
“We also discussed securitisation of our assets. We are thirsty when we are in the middle of a pool of water,” he told reporters after a meeting with AfDB officials.
“We have vast mineral resources. We should be able to use those resources to unlock access to capital, which we can use to develop our country and I believe the AfDB has that expertise.”
Zimbabwe would enhance ties with friendly countries such as China to develop its economy as the West maintains longstanding sanctions against Mugabe and his allies over charges of rights abuses, Chinamasa said last week.
The former justice minister said he would meet the International Monetary Fund in December to review Zimbabwe’s performance under a staff monitoring programme started this year.
Zimbabweans should not expect miraculous resolutions overnight to the country’s problems, Chinamasa cautioned, adding that it may be too late to help poor farmers prepare for the summer agriculture season, which starts in early October.Advertisement