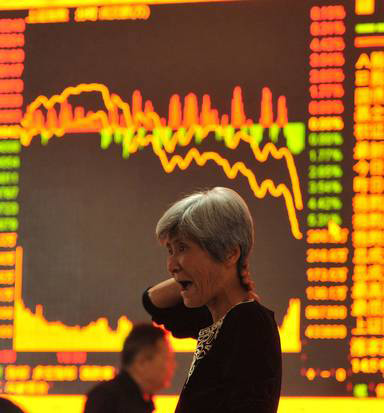 CHINA’S dramatic stock market plunge continued Wednesday, raising questions about the government’s wider plans to push through economic changes.
The country’s benchmark Shanghai Composite index tumbled 219.93 points, or 5.9%, to close at 3507.19. The Shenzhen Composite Index, which tracks China’s second exchange, dropped 2.5%, or 48.38 points down to close at 1884.45.
Other Asian markets also fell as Hong Kong’s Hang Seng index fell as much as 8% before closing down 5.8% to 23,516.56 and Japan’s Nikkei index dropped 3.1% to 19,737.64.
The losses came despite government attempts to support the market, including increasing funding to securities firms to buy stocks and making it easier for insurers to buy blue chips.
The China Securities Regulatory Commission issued a statement encouraging major shareholders and senior executives to buy their companies’ shares when prices slump.
“Investors’ panic and irrational sell-off caused a liquidity strain on the stock market,” CSRC spokesman Deng Ge said, according to state media.
Prior to the market’s recent plunge, which began in mid-June, the Chinese government was encouraging people both in and outside of the county to invest in its exchanges by saying they had become more stable.
The wider plan was to use financial markets to sell off sizable stakes in big state-owned companies and reduce the government’s role in the economy.
Now such plans may have to be put on the shelf if the rout continues and state-owned enterprises, which are seen by the government as too big to fail, actually see their dominance increase.
Chinese brokerages that were planning to use funds to expand overseas have had to scrap those plans as they use their resources to prop up domestic markets.
Twenty-one of China’s biggest brokerages have been pressed into service with a promise that they will spend 15% of their net assets to stem the “panic.”
This in turn caused their share prices to fall. Haitong Securities, China’s second largest broker, joined 1,280 other companies who requested trading suspensions after large drops. In total, 43% of so-called A-list shares were non-tradable Wednesday.
Not all companies performed poorly, however. State-owned PetroChina has actually seen its share price rise substantially as a result of the government directives.Advertisement

Shares in small and medium-sized stocks, previously seen as good investments for China’s large number of mom-and-pop traders, have borne the main brunt of the slump.
In the past few months, more Chinese citizens have piled in to the market as it appeared to be on a permanent upward trajectory. Now those same people face their investments being wiped out.
Last week, a group of Shanghai senior citizens gathered at the stock exchange to sing the national anthem in a bid to “bring it back to health”.
On Wednesday an elderly woman in Beijing threatened to commit suicide if a brokerage didn’t forgive the debts she has incurred through the market drop, the Beijing Youth Daily reported.