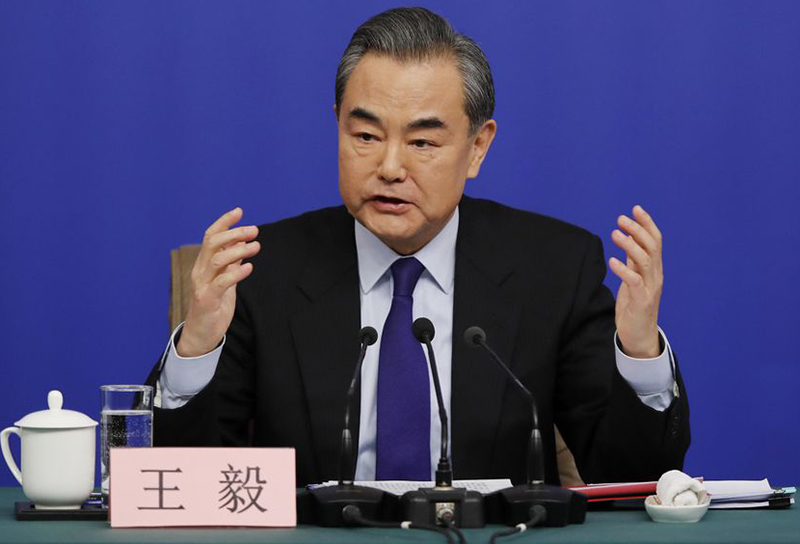 BEIJING: China’s foreign minister vowed Tuesday to protect its citizens abroad as a Canadian court decided whether to release a technology executive on bail in a case that has riled U.S.-Chinese relations.

Beijing will “spare no effort” to protect against “any bullying that infringes the legitimate rights and interests of Chinese citizens,” Foreign Minister Wang Yi said at a conference in Shanghai.

Wang didn’t mention the Huawei Technologies Ltd. executive, Meng Wanzhou, who was arrested in Vancouver on U.S. charges related to possible violations of trade sanctions against Iran. But a ministry spokesman, Lu Kang, said Wang was referring to cases of all Chinese abroad, including Meng.

The arrest prompted concern trade talks might be derailed, but Beijing indicated Tuesday they were going ahead.

China’s economy czar, Vice Premier Liu He, talked by phone with U.S. Treasury Secretary Steven Mnuchin and Trade Representative Robert Lighthizer about the next round of negotiators, the Ministry of Commerce announced. It gave no details of preparations.

The two governments have tried to keep Meng’s case separate from the trade talks, but jitters among companies and investors have roiled global stock markets.

Washington accuses Huawei of using a Hong Kong shell company to sell equipment to Iran in violation of U.S. sanctions. It says Meng and Huawei misled banks about the company’s business dealings in Iran.

A judge in Vancouver, Justice William Ehrcke, said a bail hearing would continue Tuesday for a third day.

Meng’s arrest has set off debate online in China over whether to protest by boycotting Apple Inc., whose iPhone is a rival to Huawei’s smartphone brand.

Nationalists called for consumers to support Chinese brands, a popular rallying cry in previous conflicts with Japan, the United States, South Korea and other governments. But in an unusual development, an equally large number of internet users criticized such calls as reckless.

“I feel ready to set off a campaign to boycott the iPhone and use Huawei mobile phones,” said a comment on the Sina Weibo social media service. Another accused protesters of “blindly boycotting American goods” and said “it would be useful to gain more knowledge” before acting.

Chipmaker Qualcomm Inc. said Monday a Chinese court ordered a halt to imports of older Apple iPhone models in a patent dispute. The order was dated Nov. 30, according to Qualcomm, the day before Meng’s arrest.

Huawei, the biggest global supplier of network gear for phone and internet companies, is the target of U.S. security concerns. Washington has pressured other countries to limit use of its technology, warning they could be opening themselves up to surveillance and theft of information.

“The United States doesn’t seem to be a very honorable country,” said Huang. “I think there is a conspiracy behind this.”

On Monday, a Canadian prosecutor, John Gibb-Carsley, asked the court to reject Meng’s bail request. He said she has vast resources and a strong incentive to flee because the U.S. fraud charges carry a possible maximum prison term of 30 years.

Gibb-Carsley told the judge that if he does grant bail, it should include house arrest.

David Martin, Meng’s lawyer, said Meng was willing to put up assets and cash worth a total of 15 million Canadian dollars ($11.2 million) as bond and wear an ankle monitor.

Huawei said in a statement that it had “every confidence that the Canadian and U.S. legal systems will reach a just conclusion.”

Meng’s arrest has added to U.S.-China trade tensions amid a fight over Beijing’s technology strategy.

The United States has slapped tariffs on $250 billion in Chinese imports in response to complaints Beijing steals American technology and forces U.S. companies to turn over trade secrets.

Tariffs on $200 billion of those imports were scheduled to rise from 10 percent to 25 percent on Jan. 1. But Trump agreed to postpone those by 90 days while the two sides negotiate.