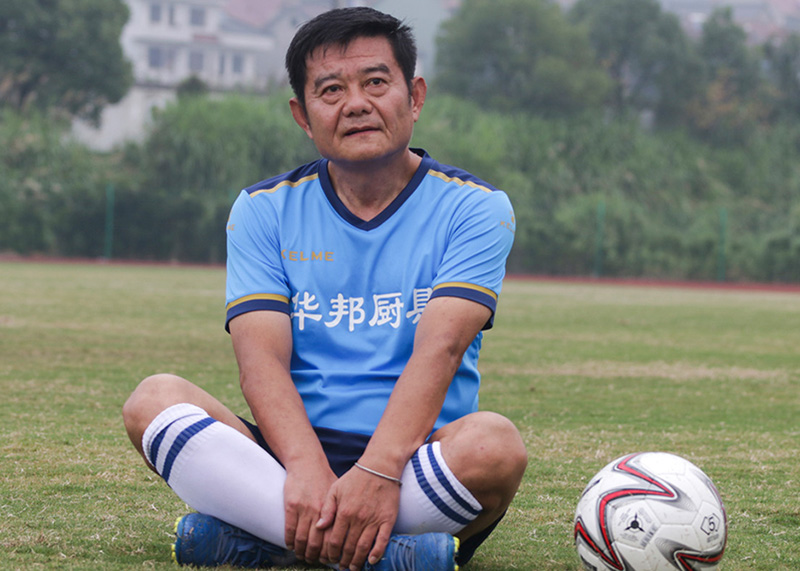 Friends call him “Maradona” and Chinese media have dubbed him “Soccer Nut” — Zhao Chongshan is 63 but he still plays football three times a week and has no plan to hang up his boots.

Zhao looks like any other doting grandfather with his gentle manner and warm smile, but he is something of a celebrity in China’s eastern province of Zhejiang because of his enduring fitness and undying love for football.

Zhao’s strong legs and broad shoulders hint at the professional player that he once was, even if he is carrying a little bulk around his waist these days.

“I will keep playing as long as I can, I feel I have no problem playing three games per week now,” he said.

“One of my motivations is that this is my hobby and I like it. Another is that I hope I can be a role model for the younger generation.”

“Honestly, it is not easy playing at my age,” he added.

The impact of football on Zhao’s life cannot be underestimated.

He began playing as a young boy on the streets, and as a 15-year-old was good enough to join the professional side representing northern China’s Shaanxi province.

Had he not been part of the team, he would have been sent to the countryside along with millions of other youths as part of Mao Zedong’s disastrous Cultural Revolution.

Then a pacy winger, Zhao played for Shaanxi until he was 27, when the family moved to the city of Hangzhou, in Zhejiang, where he lives today.

Zhao said there is no secret to his good health — he is clearly a born sportsman and still also plays basketball and table tennis.

Not to be outdone, his wife Peng Qiaoyun — remarkably, they were born on the same day in February 1955 — is a dance coach.

Zhao is remarkably fit for his age.

Zhao was a right winger in his pomp but now plays in midfield or defence after his mobility drained away.

From there he can dictate play and is equally comfortable with his right or left foot, a skill which still eludes many top players.

On Saturday, in the stifling humidity of a town outside Hangzhou, Zhao’s amateur side of mostly middle-aged men were thrashed 8-0 by Zhejiang’s professional women’s team.

Wearing the number “65” on his jersey — Zhao’s next landmark, according to the Chinese method of counting birthdays — he played the first half against the much fitter and younger women’s team.

The game often passed Zhao by, but the quality was still there even if the agility was not, only giving the ball away once and playing simple, first-time passes.

Zhao, who is devoted to his only grandchild and takes her to and from school, would prefer to play against people closer to his age — if only there were some.

“There is one I know aged 61 who used to play and had for years, but now his health is not good so he stopped,” he said.

– Playing out of trouble –

Although in remarkable health — he bounds up the flight of stairs to his apartment like someone a quarter of his age — Zhao’s wife cannot hide some concern about his determination to play on.

“He is older now so I do worry,” she said. “But as long as he doesn’t play the whole game like when he was young.

“As long as his body allows, just like with my dancing, we support each other.”

Zhao, whose favourite current player is the Brazilian Neymar, understands her reservations.

“If I get injured I can’t keep going,” he said, speaking at the couple’s homely apartment in Hangzhou, near Shanghai.

“But I haven’t got injured all these years playing because I have one big advantage — my technical skills are good.

“I have already passed the ball before I get closed down.”