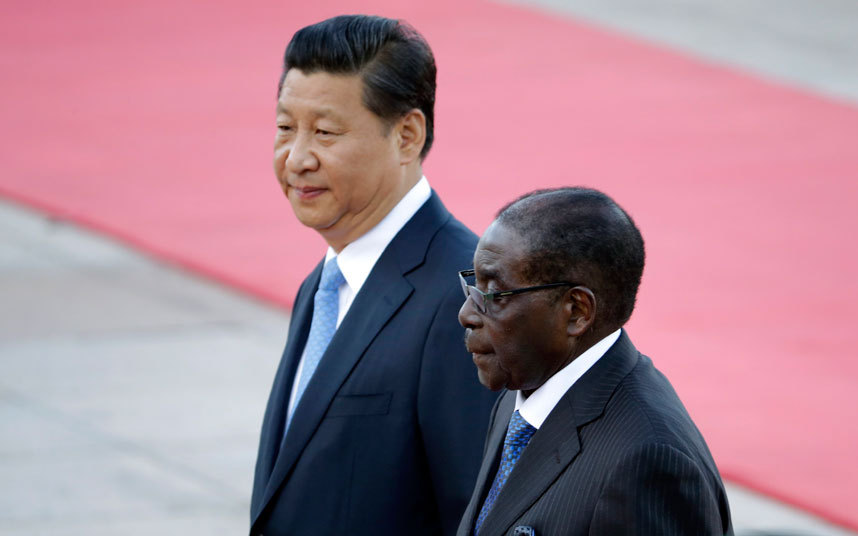 CHINESE investors who were into diamond mining in Zimbabwe were deeply affected and short changed by former President Robert Mugabe’s sudden change of the extractive mining policy, deputy Chinese ambassador to Zimbabwe, Zhao Baogang has said.

Baogang was responding to continued accusations by Zimbabweans some streetwise investors from the Asian economic giant looted the precious stone from gem-rich Marange and Chiadzwa diamond fields in Manicaland during Mugabe’s rule.

Zimbabweans also believe the Chinese built an airstrip in Marange from where diamonds were spirited away to the Asian country without being subjected to proper checks in terms of quantities mined and other requirements.

But responding to the claims at a SAPES Trust policy dialogue meeting in Harare Thursday, the Chinese diplomat said it was in fact the Asians who lost out.

“It is actually the Chinese investors who were short changed by former President Robert Mugabe’s sudden change of Marange diamond operations,” Baogang said.

“Whenever there are any problems, resolve these problems with us and not lie that Chinese plundered your wealth.”

He was referring to government’s decision to merge all firms that were mining for the precious stone in Marange into a single entity in which the Zimbabwean government owned 50 percent equity.

The directive was made through government’s ostensible attempts to streamline their operations and to ensure accountability of diamond proceeds amid claims by the former leader that the country may have been prejudiced of up to $15 billion through stolen diamonds by cartels linked to corrupt elements within his administration.

In his comments, the Chinese diplomat felt diamond miners in fact had a bigger case against the Zimbabwean government.

“…They just changed their policy and suddenly closed down the company. So, the production of the diamonds decreased dramatically from 30 million carats to three million carats of diamonds.

“We can see all the facts but Chinese just withdraw their equipment. It is closed down. Those Chinese investors also suffer great loss from it.

“So we cannot ignore the facts.”

Baogang denied $15 billion was lost through diamond theft from Marange adding that Mugabe later went back on the claims.

“That’s not a fact,” he said. “Even Mugabe clarified it in the media. So, if you say we plundered the $15 billion worth of diamonds, give me the evidence,” he said.

When the US and the West imposed sanctions and disengaged with the Mugabe regime over rights abuses and poll theft at the turn of the century, the world’s second biggest economy chose to remain friends with Zimbabwe.

In desperation, Mugabe and his government gave the Chinese unfettered access to the country’s rich natural resources.

Former Zanu PF MP and co-panelist during Thursday’s policy dialogue meeting, Daniel Shumba, a former Zanu PF MP said Zimbabwe was paying the price for allowing the Asians to come and invest in their country.

“Not putting sanctions on Zimbabwe does not mean you (Chinese) are working for Zimbabwe’s best interest,” said Shumba, who is also former Zimbabwe head of delegations to the EU Parliament.

“I am aware of the contestations between the West and China, where they drive aid and you drive investments and loans.

“Clearly, there are aggressive ways which you give loans conditionality and your participation in the economic structures of a country especially Zimbabwe are not fair.”