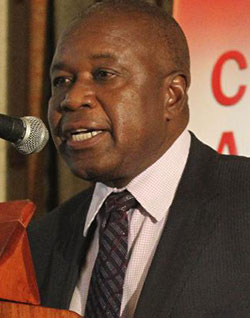 THE phone rings just as dusk begins to set in. On the other end is the voice of an agitated man who asks to meet me at the Long Cheng Plazza in Harare.
The caller refuses to disclose the purpose of the meeting and I reluctantly agree, unsure of what might befall me there.
Holding a khaki envelope, he takes his seat carefully looking in all directions as if he is being followed. He refuses my offer to buy him a drink and quickly gets to the point.
“My friend, we are tired of the Chinese. They ill-treat us and bring labourers from their country to do all the jobs we are able to do. They do not pay taxes and are cheating us. I have had enough of those people,” he says.
He hands over the envelope and asks me to pursue the matter, before scribbling the number of a Zimbabwe Revenue Authority  (Zimra) employee on a piece of paper.
The envelope contained the payroll for Jinan Corporation which mines diamonds in the eastern part of Zimbabwe and is currently at the centre of a tax dispute with Zimra.
Jinan is accused of under-declaring Pay As You Earn (PAYE) taxes by producing a parallel payroll.
Parallel payrolls
The payroll shows that Chinese expatriates working for the firm are being paid $200 a month. According to Zimbabwean tax laws, a person earning $200 or less is exempted from paying income tax.
The company insists it is paying this figure despite the poverty datum line being pegged at $511 a month, and the said salary being inadequate to cover even accommodation rentals for the workers.
A tax expert we interviewed on the matter said it was highly suspicious that the company was paying only $200 to its workers.
If this is the case then the company should be giving certain allowances and benefits to its workers, which it should declare to the tax authority in its payroll.
PAYE regulations require that taxes are paid for work done in the country. The company is also supposed to declare any allowances and benefits which it awards to its Chinese labourers to the revenue authority.
But this has not been happening, according to the whistle blower and documents he handed over to us.
Jinan Corporation, a mining company involved in diamond mining at Chiadzwa in the eastern part of Zimbabwe, is believed to be bringing in labourers from China whom it now claims to be paying these wages.Advertisement

Chinese labourers are listed by the company as earning $200 but black Zimbabwean workers dispute that this is the case.
“Chinese workers are mainly supervisors and managers and it is highly unlikely that they are paid as little as $200,” says Cosmas Sunguro, President of the Zimbabwe Diamonds Workers Union.
Efforts to get comment from Jinan officials were fruitless.
Zimra won’t comment
ZIMRA Director of Legal and Corporate Services, Florence Jambwa, refused to comment on the matter, quoting Section 34A of the Revenue Authority Act (Chapter 23:11) which bars them from providing specific information pertaining to its clients to a third party.
She said that she was “therefore unable to comment or provide the requested information because it is protected by the secrecy provisions of the Revenue Authority Act”.
But our sources in ZIMRA, speaking on condition of anonymity, confirmed the case and revealed more such cases involving the Chinese.
In another case of flouting tax regulations, a Chinese company recently applied for a duty rebate in order to import machinery that was intended to drill boreholes in the drought stricken Matabeleland South region.
However, the firm diverted the machinery and started drilling boreholes in Mashonaland Central instead, in a suspected case of rebate fraud.
The case has now sucked in a government minister (name supplied) after the Chinese company refused to pay penalties, arguing that they had been arm-twisted into violating the rebate conditions by a cabinet minister.
Such cases are often swept under the carpet as culprits bribe officials to let them off the hook.
Yet these are not the only culprits. Some companies have been implicated in dumping products such as washing soap on the local market while at the same time issuing receipts in the Chinese language.
This is against tax regulations if one is a registered value added tax (VAT) vendor.
Flouting tax regulations
A business is required to register for VAT if their sales exceed $60,000 a month. They are required to keep books of accounts and to install a fiscal machine on their premises. The machines are provided by suppliers accredited by the revenue authority.
However, the Chinese-owned Ivato Supermarkets continues to issue receipts in Chinese, raising questions on how the company reconciles its books with Zimra. The law requires companies to communicate in languages that are understood locally.
David Forsgate, a tax expert, says, “This is more of a legal issue rather than a tax issue but receipts and invoices must be issued in a local language.”
Chinese shop operators argue that they have to obtain their tills from China as they cannot buy them in Zimbabwe. This is why their receipts come in Chinese.
But locals say this is a way of hiding information in order to get away with under-declaring of taxes by the companies.
These revelations have brought Chinese-Zimbabwean relations under the microscope with some citizens interviewed describing the economic relations between the two countries as that of a ‘rider and horse’.
There are close to 60 Chinese companies operating in Zimbabwe. However, Chinese companies are treated with ‘kid gloves’ by the government, resulting in the country losing revenue in uncollected taxes.
As the country suffered economic isolation from Western partners because of its perceived negative record on human rights, it has focused all its economic efforts on the Chinese through its ‘Look East ‘economic policy.
But very little economic benefit will be harnessed from these trade relations if Chinese companies continue to flout local tax laws.
In the background of all this, Zimbabwe’s tax agency says most revenue heads are underperforming, with collections for the year to date falling 14 percent short of the $542 million target.
Last year, net collections amounted to $3, 6 billion against a target of $3, 82 billion. For 2015, ZIMRA has since set a revenue target of $3,7billion.
Govt revenue collapse
ZIMRA has failed to collect over US$500 million in taxes between 2009 and 2012, according to the auditor-general’s department.
The outstanding revenue amounted to US$508,224,725 as at December 31, 2013, with over US$240 million representing debts outstanding as far back as 2009. These startling figures show a country struggling to collect revenue.
There is also uncertainty on the kind of agreements the government has entered into with the Chinese. These could be in the form of tax breaks and other special arrangements which allow Chinese companies to behave the way they do.
However, former Zimbabwe Ambassador to China Christopher Mutsvangwa defended the Chinese, saying rules could be bent to accommodate the Chinese if it was necessary to attract investment.
He says, “Our tax authorities must learn the Chinese language rather than force the Chinese to issue invoices and receipts in local languages.”
He adds that China is the biggest economy in the world and Zimbabwe could not afford to lose investment opportunities with the “economic giant because of rigidity in national laws.”
Mutsvangwa’s attitude sums up government’s policy of appeasement to attract foreign direct investment.
Zimbabwe has failed to maximise Chinese investment because of the reluctance by its government to enforce local laws.
Until the government revisits its approach towards attracting Chinese investment, many of the companies from the Asian giant will continue to operate with impunity, depriving the country of revenue.