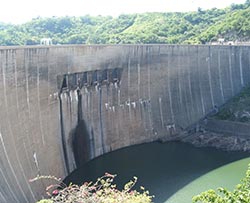 ZIMBABWE is on course to complete the Kariba South Expansion Project by December, which is being built by China’s Sinohydro, an official said Monday.
Fullard Gwasira, spokesperson for the power utility ZESA Holdings, told Xinhua that the three-year project was now 85-percent complete.
“The project is moving beyond our expectations. We expected this project to be completed by December but indications on the ground are that we may do it earlier than December,” Gwasira said.
Sinohydro is carrying out the 533-million-U.S.-dollar expansion project that will add 300 megawatts (MW) to Zimbabwe’s electricity grid and help ameliorate power shortages in the country.
Gwasira said the first 150 megawatt unit was expected to come on stream in December and the second by the first quarter of 2018.
“We are very happy about this project because on completion, we would have made a huge milestone in terms of meeting national demand,” Gwasira said.
Zimbabwe’s power demand stands at 1,400 MW but is only able to generate 1,000 MW due to ageing power plants. It plugs the shortfall through imports from neighboring South Africa and Mozambique.
Meanwhile, Gwasira said the power utility had also made headway towards expansion of another power plant Hwange Thermal Power Station by Sinohydro.
Hwange Power Station is Zimbabwe’s largest power plant with an installed capacity of 920 MW. The expansion project, at an estimated cost of 1.5 billion dollars, will add 600 MW to the national grid.
It is expected that Zimbabwe would be energy self-sufficient once the Kariba and Hwange power expansion projects are completed.Advertisement