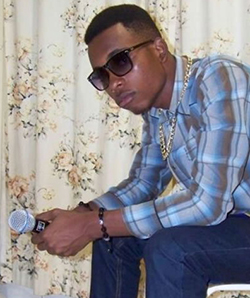 20-YEAR-OLD Takudzwa Mashonganyika, popularly known by his stage name Probeatz is a rising young artist who has just won the first prize of DreamStar Zimbabwe Talent Show 2015.
The DreamStar Zimbabwe Talent is a large-scale talent search organized and sponsored by the Chinese communities in Zimbabwe, which aims to provide opportunities for grassroots artists yearning to make their dreams come true.
Probeatz won the first prize for his brilliant beatboxing performance, a promising art form that is still trying to find its feet in Zimbabwe’s music industry.
Looking back at his beatboxing learning, Probeatz ascribes his successes so far in the showbiz world to passion, hard work and inborn talent.
“Growing up it was something that I was doing for fun,” said Probeatz.
“I started doing beatboxing professionally in 2010 but I had started it earlier without really knowing that it was beatboxing. It’s something that has been in me since I was a kid.”
The affable young artist, the first born in a family of three, has previously won several awards in various local music competitions. The latest, DreamStar, has sent him to China even before he won the competition.
Along with a dozen DreamStar contestants, Probeatz went on a two-week performance tour in China, where he interacted with Asian audience to whom African beatboxing is still a new thing.
“We were never expecting to go to China, thought it was just a bait to lure people to participate at the first place until we got our passports and found there was a visa in it,” Probeatz told Xinhua.
“I had always wanted to visit Asia, not to say to perform b-boxing there. It was like a dream came true for me,” said the young musician.
For this year’s talent search, the Chinese organizers held auditions in each of Zimbabwe’s nine administrative provinces, spanning four months to choose just a dozen finalists from 1,000 individuals and groups.
Steve Zhao, director of the DreamStar show, described the process as an amazing experience which enabled them to discover many hidden artistic talents across Zimbabwe.
“Throughout the years living in Zimbabwe, we have realized that there are a lot of young talents, they just need a platform to perform, a platform to let people appreciate their talents,” said Zhao, who is also a prominent Chinese businessman staying in Zimbabwe for over twenty years.Advertisement

For Zimbabwean grassroots artists like Probeatz, the under-development of the show business is a hindrance in their pursuit of becoming professional artists.
The lack of financing, equipment and promotion also makes the market stagnant and depressed.
However, the DreamStar Talent Show has empowered the business with professional operation and marketing.
“It is a great platform because there is sufficient marketing, social media promotion, it is everywhere, and people really love it,” Probeatz said.
“We are so touched by these impoverished yet perseverant, happy young talents who strive to make their dreams come true against all odds.
“Our show might not be the most successful and professional one, but it’s a platform built up by the benevolence and good wishes of our whole group,” said Steve Zhao.
With the support of the Chinese Ministry of Culture, some contestants of DreamStar have embarked on performance tours in major Chinese cities, showcasing Zimbabwean and African art to Chinese audience to promote cultural exchanges.
For Probeatz, DreamStar is a new start, “I want to register for a degree in music and make myself an awesome sound engineer, there is no such school in Zimbabwe, but I heard there are good music academies in China, I want to go to China,” said Probeatz, drafting a plan for future success.