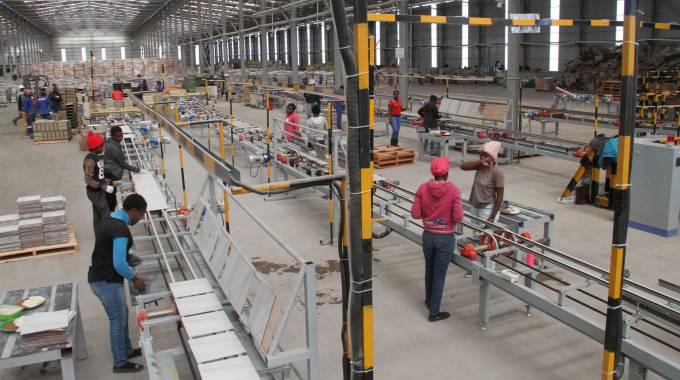 HUGGING Manyame River as you enter Norton, some 30km from Harare on the highway to Bulawayo, is Sunny Yi Feng Tiles Zimbabwe, a Chinese-owned billion-dollar ceramics venture.

It was established by Shanxi Yang Fan Logistics — which is domiciled in China — in May 2008, and gained national project status five months later.

The business, which sits on a whopping 100 hectares, boasts a floor tile sub-division that the company claims can produce 12 million square meters of tiles per year.

Sunny Yi Feng also says it has a wall tile production line capable of churning out 10 million square metres of tiles every year, in addition to a sanitary-ware and porcelain unit that can produce 30 million pieces annually.

According to the company officials during interviews, the firm exports 40 000 pieces of cups and plates as well as 35 000m2 of floor and wall tiles daily to various international destinations.

Nearly 70% of the tiles produced at the factory are meant for export while 99% of the company’s raw materials are obtained locally, investigations revealed.

From the highway, the tiles company looks busy — with clients coming and going — but sombre too.

There is no doubt that the venture is growing fast. Production units inside are expanding, and the company is setting up multi-storeyed buildings that are reported to be hostels to accommodate its local workforce, which it says will soon reach 1 200.

The hostels look disinterestedly shabby and gaunt, as they stretch into the wetland expanse that rushes downslope towards Hunyani River.

If you are a nosy journalist and go about taking photographs around the Sunny Yi Feng factory, it is not unusual to be trailed by an unmarked offroader that is commonly associated with Zimbabwe’s security agents, implying that the business venture is enjoying state protection.

No surprise, then, that Sunny Yi Feng has, over the years, escaped sanction for an alleged raft of environmental crimes and labour rights violations, amid documented complaints that it is being shielded by the ruling Zanu PF.

Investigations that were supported by Information for Development Trust (IDT) — a non-profit organisation helping journalists probe corruption as well as bad governance in Zimbabwe and Southern Africa — revealed that the Chinese firm has been a subject of discussions at high level government meetings in Mashonaland West over its alleged environmental crimes, yet no attempts have been made to rein it in.

Some of the violations are detailed in minutes of various meetings of a Mashonaland West multi-sectoral committee chaired by Provincial Affairs minister, Mary Mliswa-Chikoka, that were obtained during our investigations.

The committee was formed following several complaints of alleged corporate bullying and violations of environmental laws by Sunny Yi Feng.

Documents show that the Chegutu district coordinator, Tariro Tomu, noted during a September 2019 visit to the company that Sunny Yi Feng was discharging effluent from ablution facilities through holes that were drilled into toilets at the site.

This created fear among committee members that the effluent would find its way into the tail end of the nearby Darwendale Dam, which supplies Norton and is a major source of fish for consumers as far as Harare.

The Sunny Yi Feng factory is situated close to the Darwendale Dam confluence and is a few hundred metres away from the Morton Jaffray waterworks, which draws from Lake Chivero.

Norton residents have since written to President Emmerson Mnangagwa pertaining to the possible water pollution in the area, but it could not be immediately established if he had responded.

A site visit during investigations showed that pipes that ran from the factory were depositing brown and muddy water into overflowing ponds that fed into Darwendale Dam.

A Sunny Yi Feng environmental consultant who was identified only as Caroline, could not provide answers to questions relating to the potential contamination of the dam during an interview at the factory, which she had been asked to attend.

The committee complained about hazardous industrial and general waste dumping on and around the site.

While the complaints of pollution have been running for years, investigations showed that Sunny Yi Feng had not adopted measures to redress the situation.

Hawkers, among them food vendors, have been operating freely in the stalls built outside the complex even at the height of the Covid-19 pandemic, clients throw litter around and stagnant water ponds close to the main entrance produce a rancid odour.

The committee also flagged the firm for poor handling of hazardous substances at the site.

Lime, which is used during the tile-making process, was not being managed in tandem with environmental specifications, raising the fear that the substance could contaminate the soil and seep into the nearby Manyame River.

Available documents show that there are only three registered sites for pit sand extraction.

Minutes of meetings held by the committee indicate that the tile maker had been extracting sand along the Old Chakari Road in Mashonaland West province even though it had no licence to do so.

The company, it was further alleged, was using a local proxy identified as Munyaradzi Mutyavaviri to extract river sand from the Nyaviye River in nearby rural Mhondoro.

The Environmental Management Agency (EMA), it was discovered, issued Mutyavaviri —who could not be tracked down for his comment — with the licence.

The EMA records showed that, at the time, he had moved 780 loads of river sand using 18-cubic metre trucks provided by Sunny Yi Feng.

While the Chegutu Rural District Council gave Sunny Yi Feng a permit to extract gravel from the nearby Knockmarron Mountain and Chengeta area in Selous, the tile maker, according to documents, flouted the terms of operation.

Sunny Yi Feng was supposed to move a maximum of 2 000 cubic metres daily, operate during the day and be monitored by a council official, rehabilitate the pits through infilling and fencing off of the areas, but it failed to observe all these conditions.

“The challenge is that the company is not following agreed terms. They operate during the night, making it difficult to establish how much has been moved,” read the committee minutes.

The committee found out that more loads were being moved during the night than day.

The Chengeta pit — sited close to a school — has been abandoned without reclamation, investigations established.

The Sunny Yi Feng factory is located close to the medium density suburb of Galloway Park in Norton where residents fear that the thick smoke emitted by the tile maker is affecting their health.

The residents petitioned the company and government in July 2020.

“We are witnessing a thick cloud of smoke hanging over our suburb every day. The smoke has a very strong smell, to the extent of choking us and our children. We struggle to even breathe.

“When the smoke settles on any surface, it leaves a thick black soot. We are terrified to even imagine the damage that this soot is causing when it settles inside our lungs and other internal organs. There is no knowing if these emissions are carcinogenic or they are endocrine inhibitors,” read the petition.

Howard Gumindoga, who chairs the Galloway residents association’s subcommittee on the environment, said the emissions were most noticeable in winter.

But “the Chinese are stubborn” and will not heed the residents grievances, while EMA never returned to Galloway after testing the air for pollutants in August and October 2020.

Residents, who attached their testimonials in the petition, claimed they were suffering from different ailments which they believed were caused by the air pollution.

Charles Dube, the Norton councillor for Ward 2 where the company is situated said: “We have challenges with dark thick smoke being emitted into the atmosphere by the company.”

“Once you start exposing the Chinese, they have a tendency of calling higher offices, ministers, Chris Mutsvangwa in particular and Ziyambi who seem to benefit from them, but to whose detriment? To the detriment of the nation, and the policies and the laws of Zimbabwe,” he said.

“They have a way of getting around things…

“They have threatened most government workers not to say anything bad. The bosses, the ministers, have threatened the provincial leaders and districts to keep quiet,” added the independent lawmaker.

Chegutu RDC CEO Admire Machingura, despite earlier promises to respond to questions sent via both WhatsApp and email, later referred this reporter to Tomu, who chairs the multisectoral committee.

Tomu, however, did not respond to telephone calls and messages sent via WhatsApp as far back as January 20.

In correspondence to  Mliswa-Chikoka on November 8, 2019, Tomu complained bitterly that the Chinese were not addressing violations raised by his committee.

“Our interpretation is that the factory management is not fully committing itself to ensure total compliance regardless of the economic environment they are giving as an excuse,” noted Tomu.

There was nothing to show that the provincial minister heeded Tomu’s pleas, and she ignored media questions sent to her on January 19 this year.

Mutsvangwa accused journalists of being manipulated by Mliswa. “Your reporters have been receiving bribes from a desperate man (Mliswa),” he said.

“I would rather wait and deal with the publishing organ of your patent untruths.”

Ziyambi also denied accusations of using his political muscle to shield the company from prosecution.

“I am not corrupt and I don’t take money from people. I work for myself,” he said.

Amkela Sidange, the EMA education and publicity manager, confirmed that the Chinese company had been reported for several violations in the past.

Sidange said at some point the company was forced to shut down its factory due to concerns over pollution, but said the violations had since been addressed, adding that she needed time to check if the factory was built on a wetland.

That was despite the fact that EMA had renewed Sunny Yi Feng’s environmental impact assessment certificate in 2021.

Sunny Yi Feng deputy director, Terrify Taruvinga, invited this reporter to the company where he responded to questions in the company of the firm’s legal officer, Andrew Ndarama.

Taruvinga denied allegations that the firm was extracting soil from undesignated sites.

“We have an abnormal loading permit and we are not restricted to any specific land,” he said. “You cannot get a renewal of these certificates if you are not in compliance.”

He dismissed reports that the company  was using proxies to abstract sand and other raw materials from numerous places, also insisting that “we have a consultant who tests ambient air (air from the environment and not the source)” for pollution.

He admitted, though, that, in 2019, Sunny Yi Feng was found guilty of environmental crimes but claimed they had since complied.