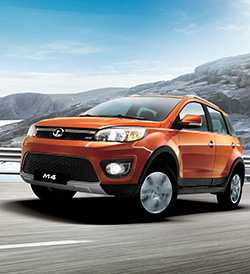 “TEST drive one of our stock units and eat every word you ever said about Chinese engineering.”
This is the advice that goes with the price list of Chinese-made vehicles at one of Zimbabwe’s leading car dealers Zimoco.
The endorsement, coming from a company that has, for years, been the sole distributor of top of the range vehicles such as Mercedes Benz, Jeep and Chrysler, shows the confidence that is growing in the Zimbabwean market in Chinese made vehicles.
Zimoco has included the range of Steed single and double cab trucks and H5 auto and manual station wagons under the GWM (Great Wall Motors) brand.
Zimoco-GWM product executive Audrey Madzima told Xinhua that GWM was competing very well with other brands.
Sales more than doubled in the six months to June largely due to their favourable pricing and reliability with Zimoco selling a total of 43 units, up from 19 recorded during the same period in 2014.
“GWM is a tried and tested brand and has overcome the condition of our rugged roads. They also come with comfort i.e. bucket seats and air-condition is standard.
“GWM also appointed former BMW M division design chief Pierre Leclercq as its design director and Ramon Ginah to further strengthen the design team,” she said.
Leclercq is the designer of the original BMW X5 and X6 while Ginah joined the company after spending more than 10 years with another top brand Alfa Romeo.
“We have a very wide range of models from small hatchback 1.5L VVTi, 2.2L MPI single and double cabs, 2.0VGT single and double cabs and 2.0VGT, 2.4L SUV.
“Our vehicles have a warranty of two years or 100,000km whichever comes first,” she added.
Madzima said it was difficult to differentiate between GWM and the traditional models especially on performance and durability, but prices remained affordable with a Steed 5 single cab selling for 21,500 U.S. dollars and the Steed 6 double cab luxury going for 43,000 U.S. dollars.
The hatchback sells for 21,300 U.S. dollars.
“Our vehicles are petrol and diesel powered averaging 8 litres per 100 km on consumption,” Madzima said.
The prices compare favourably to those of other common brands in the country, with Toyota Hilux selling between 37,000 dollars for a single cab and a minimum 45,000 dollars for a double cab.Advertisement

An Isuzu single cab goes for a minimum 30,000 dollars while a double cab costs a minimum 49,000 dollars.
“We see GWM going a long way as it is proven by the number of sales we have made over the years and demand despite the economic hardships.
“South Africa is the head office for Southern Africa and opened markets in Zambia, Malawi, Mozambique, Botswana and others. I may also add on that GWM is an international brand,” Madzima said.
The company also sells Jinbei minibuses from Brilliance Jinbei Automobile Co., Ltd in Shenyang/Liaoning, China.
“They seem to be a big hit with companies that need affordable transport for their staff,” Madzima said.
Chinese state-owned manufacturer Chery Automobile Co Ltd has also made its presence felt in Zimbabwe with its Chery brand, with a local car assembler recently launching the Chery Tiggo which sells for about 24,000 dollars.
Government departments and parastatals have become ready customers for the brand because of its fuel efficiency and low maintenance costs.
Industry figures obtained by Newsday newspaper show that GWM, Mercedes and Jaguar car sales topped the list in the six months of the year, recording growth of over 40 percent.
Many cash-strapped Zimbabweans in need of motor vehicles have had to import cheap second-hand ones mainly from Japan, Singapore and the United Kingdom.
Some of the vehicles have however failed to make the whole journey from ports of entry in Tanzania and Mozambique after breaking down along the way.
Those that are imported via South Africa and Namibia have to be transported to Zimbabwe’s borders on carriers, from where their owners can drive them to their final destinations.