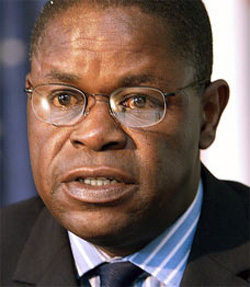 LESS than three months after stepping down  as Zimbabwe Cricket (ZC) chairman, following more than two decades at the helm, Peter Chingoka has been named one of the organisation’s honorary life presidents.
Chingoka joins Alwyn Pichanick and Dave Ellman-Brown, the other recipients of this title.
Although largely a ceremonial position, which is celebrated by extending invitations to matches and other events, honorary life presidents can also attend ZC AGMs and consultative forums.
Chingoka is expected to act in an advisory capacity for ZC and may also represent them at the ICC.
ZC have had a troubled relationship with its other two life presidents. During one of its many unsettled periods, Pichanick and Ellman-Brown were stripped of their titles.
They were later reinstated and have since been involved in the game.
Pichanick was offered the role of an arbitrator by ZC in a dispute with players over payment earlier this year while Ellman-Brown has served on the country’s Sports and Recreation Committee and was involved in events like ZC’s awards in 2010, where he gave the vote of thanks speech.
Chingoka is certain to have more of a role to play as ZC aims to get its house in order amid spiralling debt which may be why the decision to elevate Chingoka to the life presidency position was made unanimously by ZC board members.
“The approval by the affiliates of the invitation for you to become an Honorary Life President of ZC is testimony of your impeccable record of service to Zimbabwe cricket,” Wilson Manase, Chingoka’s successor and current chairman said.Advertisement