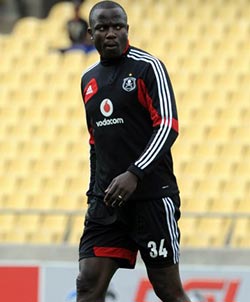 PLATINUM Stars coach Allan Freese has urged Takesure Chinyama to step out of the shadow of more prominent strikers at the club and work towards commanding a regular place in the team.
The former Dynamos striker, who arrived at the start of the season, has not enjoyed the kind of form that saw him scoring eight League goals in nine League starts while he was still on Orlando Pirates’ books.
The Zimbabwean international also scored four goals for Pirates during the early stages of their CAF Champions League campaign – playing a role in laying the foundation that saw the Buccaneers going all the way to the final of Africa’s most prestigious competition.
This season, however, things have not been that rosy.
Even the departure of key players such as Thuso Phala, Enocent Mkhabela and Joseph Molangoane has not made it any easier for incoming players such as Chinyama to be guaranteed game-time.
While Freese says Chinyama’s experience is vital to the side, he encourages the player not to lose hope and to continue working hard.
“He is a good player and must continue working hard at his game to break into the team and play regularly,” Freese told KickOff.com.
“Look, [Henrico] Botes is delivering when it comes to goals and there are other players such as ‘Tsotso’ [Ngele] who are also supplying the goals.
“You do not want to tamper too much with a winning team, but my advice to Chinyama is that he must never give up. He is a professional player and must work harder.”
Platinum Stars moved up to third in the log standings following a come back-from-behind 2-1 win against Golden Arrows at the weekend.