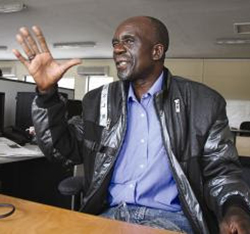 CONTROVERSIAL musician, Hosiah Chipanga, on Wednesday said he has been trying to get audience with President Robert Mugabe over the manner he has been presiding over state affairs.
He said his efforts have however, been blocked by Mugabe’s aides who have dismissed him as “a lunatic”.
“I have for a long time tried to see the president but his people have not allowed me. There is resistance to spiritual advice and healing by top leaders in our institutions and government,” he said.
“I wanted to tell Mugabe the kind of government that he should have led when he assumed power in 1980.”
Chipanga sings about social issues that include the plight of Zimbabweans battling under the weight of an economic crisis and massive corruption.
“We removed the whites and adopted their governance as well as legal system, their state apparatus. Our government is pre-occupied with how to make money rather than how life can be enjoyable for its citizens.
“Some of the laws that are being used on our people now are even worse than those used by the Rhodesians. His (Mugabe)’s protectors have always denied me the chance and think I am a lunatic,” he said.
“That is why at one time I have tried to contest elections in order to get Mugabe’s attention. Even my lyrics are designed to get his attention but all has been in vain thus far.
“They think I am on drugs when I tell them I want to see the president. They should give me the chance, even if they think I am a madman, rather than take me as a joke”.
Chipanga tried to contest the 2013 harmonised election but chickened out at the eleventh hour. He compared himself to the Biblical Moses who was sent to liberate Zimbabweans.
“I am like the Biblical Moses sent to Pharaoh to serve our people, this country needs spiritual guidance.
“God has a particular spiritual wish for this country and we should never compare ourselves with other countries for example in making citizens pay for water,” he said.Advertisement