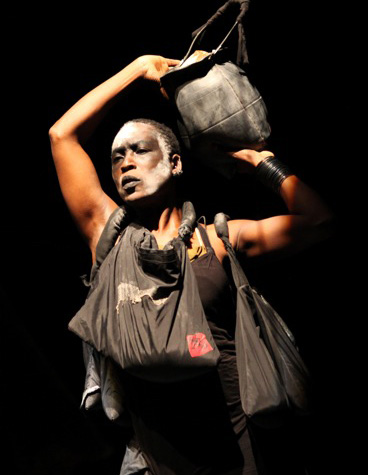 DANCER Nora Chipaumire “Dark Swan” piece will be part of the “Hep Hep Sweet Sweet” performance by choreographer Jawole Willa Jo Zollar at the Chicago’s Dance Center beginning Thursday through to Saturday.
Celebrating a 30th anniversary, Zollar’s Urban Bush Women are a noisy, outspoken bunch. They sing, dance, clap and stamp (early shows sometimes included Sweet Honey in the Rock), and “Hep Hep” is set to live and recorded vocal and piano music of the period.
In her “Dark Swan”, a solo effort, created for herself, Nora reimagined Michel Fokine’s 1905 ballet solo “The Dying Swan,” using both the original score, “The Swan” from Camille Saint-Saens’ “The Carnival of the Animals,” as well as popular music.
Self-exiled from her native Zimbabwe in 1989, after Robert Mugabe massacred thousands of its citizens, Chipaumire wanted to subvert Fokine’s romantic view of “the beauty of death,” according to Zollar.
Instead, Zollar explains, the choreographer wanted to explore the struggle to defy death as well as to “proclaim the self — not letting the female body be romanticized. The black female body is the site of that exploration.”
Calling “Dark Swan” provocative and fearless, Zollar says she later asked Chipaumire to refashion it as a group piece for the Urban Bush Women dancers.
“Nora responds to the energy of the work and to what makes it feel right,” says Zollar, and whenever she’s revisited the piece – she’s also set it on a group of men, and on a group of 21 – it’s always different.
Zollar sees the ensemble as a flock and the individuals within it as preening swans. “Dark Swan” can be considered “adult material,” she adds, but not in any overt way; rather, it expresses women’s sensuality and power.
Advertisement