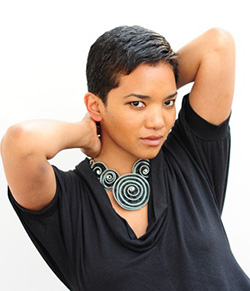 ACTRESS Chipo Chung stars in the forthcoming US television series A.D. which, according to commercial broadcaster NBC, explores the “exciting and inspiring events that followed the Crucifixion of Christ”.
Says NBC on its website, “As most of the world knows, the Crucifixion was only the beginning of the story.
“The immediate aftermath of Christ’s death had a massive impact on his disciples, his mother Mary, and key political and religious leaders of the era, completely altering the entire world in an instant.
“Watch as the disciples struggle to survive and share their beliefs, guiding us from the sorrow of Christ’s ultimate sacrifice to the awe-inspiring wonder of the Resurrection and beyond.”
Zimbabwean Chung, who portrays Mary Magdalene, is part of a diverse cast for the series which has been drawn from 10 countries.
Often thought of as the second-most important woman in the New Testament, after the mother of Jesus, Mary Magdalene travelled with Christ as one of his followers.
She was present at Jesus’ two most important moments: the crucifixion and the resurrection. Within the four Gospels, Magdalene is named at least 12 times, more than most of the apostles.
Meanwhile, Argentinean actor Juan Pablo di Pace portrays Jesus Christ while Babou Ceesay, a Gambian native portrays John. Italian actress Greta Scacchi filled the role of Mother Mary while Peter is portrayed by Adam Levy of the U.K.
“A.D.” premieres on Easter Sunday, 2015 and is produced by Roma Downey and Mark Burnett.
In a statement about “A.D.,” Downy highlighted the well-rounded cast.
“Christianity is among the most diverse movements in history, so when Mark and I looked to bring this epic story of A.D. to life on NBC, is was important to us to find a cast as diverse and beautiful as the church is around the world,” the actress explained.
The “Touched by an Angel” star added: “We look forward to sharing these amazing performances with our audience, and in them we hope that people see themselves.”
The NBC series is the producers’ follow up to the hit “Bible” series which aired on the History Channel.
Picking up right where the “Bible” series left off, “A.D.” follows a harrowing yet uplifting journey through the birth of the church.
In fact, the television event will detail the first ten chapters of the Book of Acts, exploring the aftermath of Christ’s death and its impact on his disciples, his mother Mary, and influential political and religious leaders of the time.Advertisement