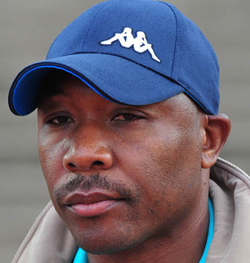 Club owner Chippa Mpengesi called a technical meeting to review the team’s performance and decided Mugeyi had to go.
The Zimbabwean – who recently signed compatriot Benjani Mwaruwari for the club – is the fifth coach to leave the club this season.
Mugeyi, appointed in February, had picked up just one win over Black Leopards during his brief spell.

Chippa United have gained back-to-back promotions but appear set for the drop again.

Club fans have voiced concern at the lack of stability at the club, accusing Mpengesi of changing coaches too hastily.
Roger Sikhakhane was first to go, just after the team was promoted. Manqoba Mngqithi was next, after just four matches, after which assistant coach Julius Dube took over.
Farouk Abrahams was appointed in December, and then fired at the end of January.Advertisement