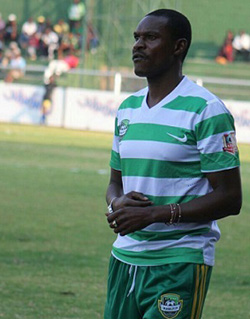 FC Platinum 3-1 Dynamos
Chicken Inn 2-1 ZPC Kariba
OBREY Chirwa scored a memorable double as FC Platinum thumped defending champions Dynamos 3-1 in a Castle Lager Premiership match at Mandava Stadium on Saturday.
It was not just victory on the day, but victory on two fronts as Platinum avenged a 1-0 defeat they suffered at the hands of Dynamos in the reverse fixture.
Secondly, Platinum also dislodged the Harare side from second place as they now have 41 points, two better than their adversaries.
Platinum, though are five points behind marauding leaders Chicken Inn who edged ZPC Kariba 2-1 at Luveve on Saturday to move to 46 points.
At Mandava, former Dynamos defender Gift Bello delivered the warning shots as early as the fifth minute when he hit the opener from a set piece.
But Takesure Chinyama equalised after ten minutes of play, slotting past Petros Mhari.
Then started the Chirwa show. He gave Platinum the lead in the 32nd minute to ensure an edge going into the breather.
In the second half, Bello locked out talkative former teammate Rodreck Mutuma while hard core midfielder Gerard Takwara cut off supplies to Chinyama as well.
Then 18 minutes from time, Chirwa wrapped up the sweet win with his second of the afternoon that took off the steam from Dynamos who were desperate for an equaliser.
In other matches, struggling Bulawayo side Highlanders fell 1-0 to Harare City at Rufaro while Flame Lily edged Hwange 1-0 at Larfarge.