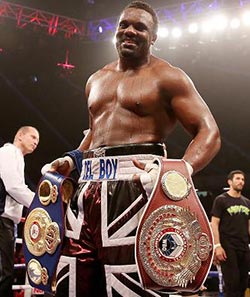 DERECK Chisora’s promoter is eying a rematch with Tyson Fury or another fight with a Klitschko after the British heavyweight won his fourth fight in a row.
Chisora defeated little known Ondrej Pala at the Copper Box in London on Saturday night as a barrage of punches near the end of the third round saw Pala turn his back on the action, giving the referee no option but to stop the fight.
Zimbabwe-born Chisora has bounced back well since being knocked out by David Haye in the summer of 2012 with four victories on the spin including a victory over Germany’s Edmund Gerber in September which saw him claim the European Heavyweight title.
Now his promoter Frank Warren says he would like to see Chisora get back into the ring with Fury. Chisora lost on points to Fury back in 2011 but was woefully out of shape at the time.
“Dereck is the mandatory challenger for David Price’s British title. We’re waiting on a contract being returned from David, but the fight I would love to see is a Tyson Fury rematch,” admitted Warren.
“I would also like to see Dereck back in with a Klitschko. He’s a better fighter now, and he’s been there and done it.”
Chisora lost on points to Vitali Klitschko in February 2012 with the now infamous post-fight press conference shenanigans with Haye leading to their showdown in the ring.
Before fighting Fury though, Chisora would have to persuade the Manchester fighter to call off his retirement plans.
Fury said he was quitting the sport last month when a proposed fight with Haye was called off for the second time due to what looks like a career ending shoulder injury to Haye.
Chisora (19-4) said Pala caused him some problems but that it is time for a step up in level.
“Fair play to the guy because he caught me with a couple of good shots, but I was drifting in there and I need a top class opponent who can test me,” he said.Advertisement