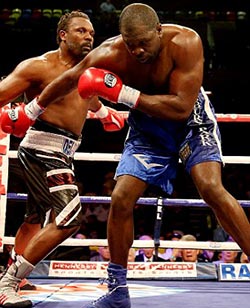 DERECK Chisora claimed a unanimous points victory over Kevin Johnson at the Copper Box Arena to put himself on a collision course with fellow British heavyweight Tyson Fury.
Chisora was untroubled in his win over the New Jersey fighter, claiming the contest 118-109, 118-110 and 118-109 on the judges’ scorecards, with a likely fight against Fury – himself a winner on the undercard in Stratford – next up.
The winner of that contest would almost certainly claim a world title shot.
Such a fight would surely prove more testing for Chisora than his bout with Johnson, who was beaten by Fury in 2012.
Chisora made a high-octane start but his opponent was not overawed, getting in some decent shots of his own in the first couple of rounds which were relatively even.
Thereafter, though, Chisora started to assert his authority.
In the fourth, in particular, Chisora got in some big hits with his opponent on the ropes, although Johnson complained he was taking shots to the back of the head.
Then in the fifth, Chisora sent his opponent sprawling to the canvas with a huge right.
To his credit, Johnson made the count and recovered to at least continue the contest.
But his jabs were causing little or no trouble to Chisora, who was well ahead and could box well within himself.
Chisora was coasting in the later rounds and Johnson perhaps shaded a couple, but he re-asserted himself with a big shot in the 11th.
And when the final bell came there was no doubt who the victor was.
Earlier, Fury needed just four rounds to emerge victorious against Joey Abell.
Fury took some heavy shots in the first two rounds, and there was a moment of controversy when he caught his opponent after the break in the third.
The referee took no action and Fury repeatedly sent his opponent to the canvas – and when it happened a fourth time, that proved to be the end with the referee stepping in.Advertisement