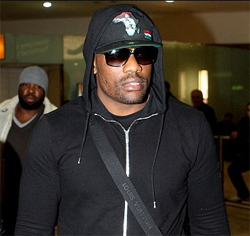 DERECK Chisora admitted he quit boxing after his defeat to David Haye – only to complete an about-turn just two weeks later.
The 29-year-old heavyweight told promoter Frank Warren he was retiring after his July 2012 knockout by Haye.
Chisora revealed Warren accepted his decision without argument, before the Zimbabwe-born fighter changed his mind a fortnight on.
Warren is confident Chisora can position himself for another shot at the heavyweight world championship.
Warren is in talks with 32-year-old Bulgarian Kubrat Pulev’s representatives, Sauerland Event, for a potential world title eliminator fight.
Chisora will return to the ring against undefeated Italian heavyweight champion Matteo Modugno on November 30 at the Copper Box Arena.
The London-based boxer admits he must win the fight or any hopes of a world title challenge will evaporate.
Chisora explained: “After I lost to David Haye most people don’t know I went away for a while and had to think long and hard about what I was going to do.
“Then I went to see Frank at his office, and said ‘Frank, I don’t want to fight any more’.
“And he was fine with that, he told me he was always here for me though.
“I went away and kept thinking about it though, and two weeks later I went back to Frank and we signed a new contract.
“My mum told me you can’t do this if you don’t give it 100 per cent, and that’s exactly right.
“But I remembered when I started amateur boxing and the impression I wanted to make, and that drove me back into it.”
Chisora will fight on the same card as Welshman Nathan Cleverly, making his first foray into life as a cruiserweight.
Warren might be talking world titles and the Klitschko brothers, but Chisora knows he can ill afford to lose focus.
He continued: “I feel I am in a better place mentally and physically now.
“I’ve committed to better training, I’m in good shape and that’s all a mental challenge.
“Any time you take on an undefeated fighter it’s dangerous, because they don’t have any fear, they just come at you and they are confident.
“So I can’t afford to look beyond this fight, I must concentrate totally on giving everything for this fight.
“It’s great that Frank is talking about eliminators and things like that – but if I don’t win at the end of the month, that will never happen.”Advertisement