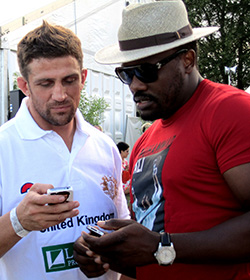 DERECK Chisora wants to ‘Rumble in the Jungle’ with Wladimir Klitschko this October on the 40th anniversary of Muhammad Ali’s legendary battle with George Foreman in Kinshasa.
The European heavyweight champion said his dream is to fight Tyson Fury in the summer and then challenge Klitschko for the World Boxing Organisation crown in the Democratic Republic of the Congo, formerly known as Zaire.
Chisora, whose four victories in 2013 have created a momentum for him, said: “I want to fight Wladimir Klitschko this year, but I don’t want him coming to us, dictating terms.
“We have to be able to force the issue with him by becoming mandatory challenger, so that the fight can go to purse bids.
“I want to take the fight to Africa, to Zaire. Frank knows I want that, and if we could take the fight to Africa it would be the ‘Rumble in the Jungle’ all over again.
“They will be chanting ‘Delboy, Bomaye’ as they did for Muhammad Ali,” said Chisora, recalling the scenes from the movie When We Were Kings, as Zairians cheered for Ali.
“I have made inquiries and three phone calls and we could have it in Zaire. There are backers in Africa who would deliver it.”
Chisora must first win his next defence of the European heavyweight title against undefeated and hard-hitting Ukrainian Andriy Rudenko on Feb 15 at the Copper Box Arena in east London, where Fury is also expected to make his first appearance on BoxNation. Fury’s opponent that night is yet to be announced.
If both win, it sets up talks between the Fury and Chisora camps for a joint promotion for a long-awaited rematch between the two. Fury defeated Chisora on points in July 2011 to take his British and Commonwealth belts and his undefeated record.
That said, Chisora was a stone heavier then and he has transformed himself both mentally and physically since then. In 2013, Chisora was one of the most active heavyweights in the world’s top-10 rankings.
There is plenty of needle between the two bad boys of British boxing, and Warren believes the rematch could take place in June at a football stadium in a huge summer showdown.
The fight makes sense on many fronts: Fury, 25, has been searching for a new opponent since David Haye pulled out twice against him through injury in a high profile bout which had captured public imagination.Advertisement

The WBO route to a world heavyweight title challenge is also plausible. Chisora is No 2 with the WBO, with Fury ranked No 6.
Chisora said he would not be looking past his Feb 15 opponent Rudenko, whom he regards as “a dangerous fighter”.