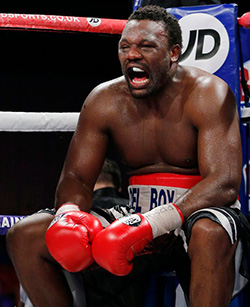 LONDON: Dereck Chisora cannot see 2017 ending without him fighting Dillian Whyte again.
Whyte is chasing a heavyweight title shot, but Chisora wants Whyte to embrace their rematch instead. The London-based contenders produced one of the best action fights of 2016, which Whyte won by split decision December 10 at 02 Arena in London.
Neither the Zimbabwe-born Chisora (26-7, 18 KOs) nor the Jamaican-born Whyte (20-1, 15 KOs) have fought since their entertaining slugfest nearly eight months ago.
Whyte, 29, is scheduled to return August 19 for an eight-round tune-up fight against American Malcolm Tann (24-5, 13 KOs) on the Terence Crawford-Julius Indongo undercard in Lincoln, Nebraska.
“The rematch is going to happen,” Chisora told Sky Sports for a story posted Monday on skysports.com. “The world is going to have to see the rematch. I’m going to destroy that guy. I’m going to batter him from corner to corner. I’m not even joking. I’m going to destroy him. I’m going to have to knock him out.

“I just want to fight. It will be a great fight. Dillian is going to come to fight. I’m going to come to fight. It’s going to be exciting. I would relish that fight. I would love that fight. I would take that fight at any time.”
According to Whyte, the 33-year-old Chisora’s unreasonable approach to negotiating is the reason their rematch hasn’t already taken place.
Whyte says his promoter, Eddie Hearn, has tried to make their rematch twice thus far, but hasn’t been able to come to a financial agreement with Chisora.
“It can happen, but the problem is Dereck Chisora doesn’t know how to negotiate or do good business,” Whyte told Sky Sports. “Yes, the fight can happen. All Eddie has to do is pay me and look after me the way I deserve to be treated.”
Whyte was blunt, though, regarding which heavyweight needs their rematch to happen.
“I’ve beaten Chisora already,” said Whyte, who edged Chisora by slim margins on two of three scorecards (115-113, 115-114, 114-115).
“The only reason I would fight him again is if the money is right. If they are willing to pay me the right amount of money and I’m given the right deal, then I would fight him tomorrow.”Advertisement