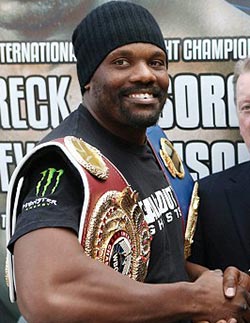 DERECK Chisora is adamant he will knock out Kevin Johnson when the pair clash this weekend, prompting the American to make a unique vow.
The heavyweights came face-to-face at Thursday’s press conference ahead of their showdown at the Copper Box Arena on Saturday night.
British banger Chisora goes into the fight with a lot on the line as he eyes a summer blockbuster with Tyson Fury and has vowed to blast his way past the brash-talking Johnson on route to that goal.
“I’ve watched a few of Johnson’s fights,” said Chisora. “The way I fight and the way he fights is totally different.
“I’m looking for a knockout so he can run and run but there’s going to be pressure on him. I’m going to go out there looking for him and I’m going to hurt him basically,” he said.
“I’m not looking at anything expect Kevin Johnson right now. I’m not looking at any other fight in the future. All I’m focused on is beating Kevin Johnson,” added Chisora.
Johnson, who is no stranger to British shores having fought in the country before against Fury as well as in a Prizefighter tournament, was in fine form as he confidently declared that Chisora was an opponent and style he would be able to easily handle.
“Fights like this are the ones I do the best in. Pressure fighter, a puncher, a brawler – these are the guys that get stopped, these are the guys I look the best against,” said Johnson.
“So I definitely look forward to this fight because I capitalise on guys with this type of style. I couldn’t have asked for anything more with a guy with this sort of style, anything different then I might not be here today. But this one right here is definitely worth flying over for,” he said.
The 34-year-old from New Jersey is a hardened veteran who has never been stopped in the ring and is certain it won’t be happening anytime soon.
“I’ve been stopped once in my life and that was by my momma and ever since then nobody’s put me down,” Johnson joked.
“My momma whopped my behind since I was seven-years-old. I got hit by lefts, rights, uppercuts, sticks, board, cat, dog, strap, bat, everything you name it but I’m still here.
“I guess it made me the tough, strong, broad male that I am today and unless you whop me you ain’t putting me down. My momma’s a heavyweight man. My momma’s 6’1” 210 pounds. Trust me, it was a hell of a nightmare.Advertisement

“Chisora’s style is what I know best. I know pressure and I know how to fight punchers. Granted if you want to take the punch count blow-by-blow and line them both up, he’s a better slugger than I am. But I’m a smarter boxer, I’m a faster boxer.
“If he knocks me out, I will become his personal cheerleader for the rest of his life,” Johnson declared. “And I will definitely shake on that.”
Chisora was quick to fire back, claiming that the American’s trash talking was the same as those deployed ahead of his points loss to Fury in 2012.
“We’ve heard it all before. I think he said the same thing when he was boxing Tyson Fury. All Americans say the same thing. Us Brits we just sit there and listen and then we do it in the ring,” Chisora said.
“I’m going to go out and I’ll tell you what, I won’t be on the canvas, he’s going to be on the canvas. As I already told somebody I will knock him out. Without a doubt, I will knock him out.”
Once the two men shook on Johnson’s cheerleader ‘bet’, ‘Kingpin’ demanded to know what he would get if he avoided a stoppage.
He said: “Now what happens when you do not, that is the question.”
When pushed by Chisora for an answer, Johnson jokily responded: “I want three British women, I am not greedy.
“I want to live for the day and go home tomorrow. Give me three and I will have them there by nine and have them back by 12. I have got a strict curfew.”