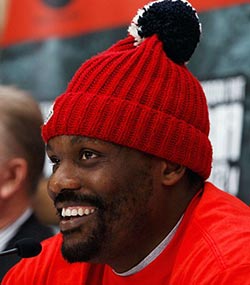 DERECK Chisora has pledged to streak down London’s Oxford Street if he beats Ondrej Pala at the Copper Box on Saturday night.
The controversial heavyweight takes on the Czech looking for his fourth consecutive stoppage of what has been a productive year.
But he has planned to celebrate in his own distinctive way – all in the name of charity.
“On December 19, I will be running down Oxford Street completely naked to raise money for Help for Heroes,” Chisora said.
“All I will wear is my Union Jack mask and I’ll do it early in the morning.”
Chisora, 29, won the European title in his last outing against Edmund Gerber but has his sights set on another crack at a world title next year.
“I believe that 2014 will be a very special year for me,” he added. “I’m open to fighting anyone whether that is a re-match with Tyson Fury, Deontay Wilder or whoever.
“If that’s the road I have to go through to get another crack at the world title I’m ready for it. I’ve learned a hell of a lot over the past two years and the experience I’ve picked up is going to be crucial to me going forward.”
Chisora had his first shot at a world title when he came up against the older Klitschko brother, Vitali, in only his 18th bout back in 2012, losing over 12 rounds.
With the boxing landscape now changing and the formidable Klitschko brother dominance appearing to be coming to an end, Chisora believes he is ready to take on either of the Ukrainian powerhouses in another stab at world glory.
“I know I’m ready for another world title challenge and I don’t care which Klitschko brother I have to face to get those belts,” he said.
“I feel there’s going to be a changing of the guard next year in the heavyweight division and I want to be right at the front of the queue. You’re going to see the best Dereck Chisora over the coming year, starting with Saturday night against Ondrej Pala.
“I’m coming off great wins against Edmund Gerber and Malik Scott – who many tipped to be the next best thing in the division.
“I’m hungry for success and nothing and no one is going to stand in my way of achieving my ambitions. I’ve never taken an easy fight and have always tested myself against the best right from the start of my career.
“Some fighters like to pad up their records by fighting and beating guys who aren’t even recognisable.
“The level of competition I’ve faced, despite having only had 22 fights, speaks for itself. That type of competition can only bring you on as a fighter and I feel myself maturing, ready to take that next big leap in my career.”Advertisement