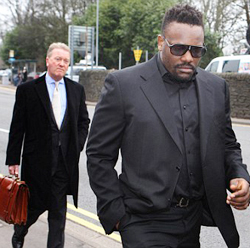 DERECK Chisora and Wladimir Klitschko had to be separated after a heated confrontation in an Ibiza nightclub last week.
The heavyweight boxers were holidaying on the island when they crossed paths. Zimbabwe-born Chisora extended his hand to the world champion who pulled him close and said: “We’ve got unfinished business.”
The fighters squared up to each other and exchanged words before bouncers stepped in to diffuse the row.
The “unfinished business” relates to the shameful scenes in Munich last year when Chisora spat water in Klitschko’s face in the ring moments before his world heavyweight title fight with the Ukrainian’s brother Vitali.
Chisora, 29, lost a unanimous decision to the WBC champion before brawling with David Haye at the post-fight press conference.

But the London-based boxer has since bounced back, becoming the first man to defeat American Malik Scott at Wembley earlier this month.

He will return to the ring on September 21 at the Copper Box Arena as he builds towards another world title shot.
Klitschko, meanwhile, defends his titles against Alexander Povetkin in Moscow on October 5. Chisora’s trainer Don Charles said: “They have history, but it was purely a coincidence that they bumped into each other during their holidays.”Advertisement