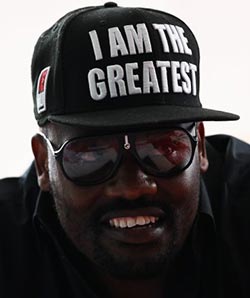 DERECK CHISORA’S next opponent, Andrey Rudenko, has had to withdraw from his upcoming bout with the Zimbabwe-born Londoner with a ruptured achilles tendon.
Ukrainian Rudenko was scheduled to face Chisora at the Copper Box Arena in February, but suffered the injury this week during a training session.
Initially the news came as a blow to British Boxing fans as a highly anticipated rematch between Chisora and Tyson Fury, who fights on the undercard, was anticipated if both fighters emerged from the Copper Box triumphant.
However, Finchley puncher Chisora will still headline the show and defend his title against a new challenger to be announced.
Promoter Frank Warren said: “We’re disappointed to hear that Rudenko has suffered this serious injury and has had to withdraw.
“It’s very unfortunate but these things happen and we have to move on and secure Chisora a new challenger for his European title on the 15th February.
“We have some names that we are working and will look to announce the name very shortly.”
Chisora’s reputation is firmly back on the rise after the 30-year-old entered a period of profligacy several years ago.
The heavyweight was handed big opportunities against the likes of Fury, David Haye and Vitali Klitschko, but won just one of his five fights during 2011 and 2012.
Since then, Chisora has gone four fights unbeaten and holds the EBU heavyweight title, as well as the WBA and WBO international heavyweight belts.
Both Chisora and Fury have developed controversial personas in their careers, and should they both win their February bouts, a hailstorm of smack-talk is sure to ensue leading up to any clash between the British duo.
However, with no opponent in sight following Rudenko’s withdrawal, there remains a long road before fans are treated to any such extravaganza.Advertisement