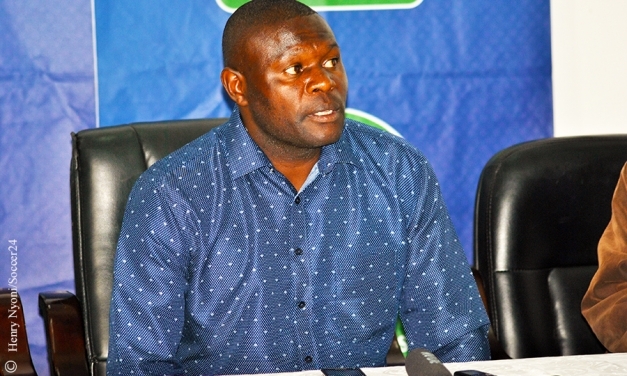 CAPS UNITED head coach Lloyd Chitembwe weekend vowed to confront his bosses for bringing shame to the top premiership side when they were caught unprepared to deal with a team kit clash with hosts Bulawayo Chiefs’ in a match that finished 2 all on Sunday.

The Castle Lager Premier Soccer League encounter between the two sides at Luveve Stadium kicked off 35 minutes late after the accidental match of colours.

It emerged that Caps United, as per rule when a team is playing away, did not travel with an away kit, something which would have prevented the embarrassment.

As a spur-of-the-moment decision, the Harare side’s players were forced to turn around their orange warm up t-shirts and using a mighty marker to inscribe numbers on their backs.

The embarrassing incident left a lot to be desired over Zimbabwe’s 2016 CAF Champions League representatives’ attitude to professional football.

Chitembwe’s rants soon after the match told it all, as the former Warriors link man chose to direct all his frustrations as his bosses.

“You don’t expect these things to happen especially at this level of the game. Administratively, we were found wanting.

Obviously it’s something I will address with my top hierarchy,” Chitembwe told journalists soon after the match.

“In this case, we know we were culpable. It was our responsibility to make sure that we did change our kit but for unknown reasons to me, to the players, we had one kit. So it’s something that I obviously want to seek answers from the top hierarchy.”

As the 2015 premiership champions go on a witch-hunt, it also emerged that their kit manager, Tongai Mupfandaedza was in Zambia for the four team tournament which saw Sunday Chidzambwa’s Warriors side end the international football extravaganza as number last.