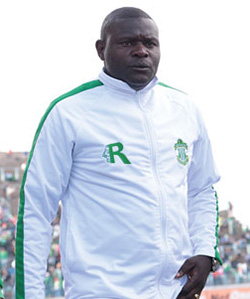 CAPS United’s dramatic comeback to salvage a point in Sunday’s 3-3 draw, with Dynamos has left coach Lloyd Chitembwe believing that his side deserve the league title.
United produced what could easily pass as the greatest performance of the season, when with five minutes to go while trailing 3-0, they staged a vintage performance to force a 3-3 draw.
Defender Dennis Dauda scored a brace while Amon Kambanje grabbed the other goal, to save Caps United from derby blushes and keep alive their hopes for ending a 11-year league title drought.
United still lead the race although the Sunday’s draw allowed second-placed Highlanders to cut their lead by just a point.
Coach Chitembwe was however left satisfied that his players could help Caps land the ultimate prize in Zimbabwean football.
“These are signs of greatness in the team. I have always said that there is something special about this group of players,” Chitembwe said.
“I thought we were going to be dead and buried after that poor performance in the first half and part of the second half. But I think everyone can testify that the last 15 minutes were brilliant from my boys. The whole idea was to at least get something from this game and I am happy we managed to collect a point.”
Sunday’s result saw Caps United managing to avoid defeat by Dynamos this season after beating their bitter traditional rivals in the reverse fixture 1-0 in May.