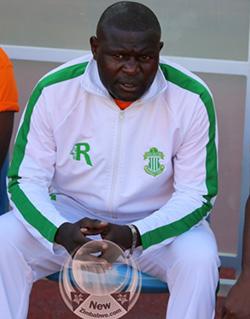 ZIMBABWE champions CAPS United suffered a shock coach 2-0 defeat to lowly Yadah in a Castle Lager Premiership tie at Morris Depot on Tuesday, leaving coach Lloyd Chitembwe pondering over his future.
The Premiership new boys have developed a knack of slaying giants, after beating title contenders Ngezi Platinum and ZPC Kariba.
On Tuesday, it was the Green Machine’s turn and the defeat was their second in the season, coming a week after they lost 4-2 to Al Ahly Tripoli in the African Champions League which left them at the bottom of Group B with just three points to show.
Jimmy Dzingai Munyaradzi Chiwara scored the goals that counted for Yadah on 47 and 63 minutes respectively.
But Caps United missed opportunities in the second half, with Ronald Pfumbidzai coming close with a free-kick that crashed against the upright post on 74 minutes.
United had also missed an earlier opportunity – Tafadzwa “Fire” Rusike coming close with a speculative shot that could have changed the complexion of the game.
However, Yadah held on to their lead and had a goal disallowed towards the end.
The Caps United gaffer took responsibility for the team’s lacklustre show.
“Naturally it’s disappointing to lose,” said Chitembwe after the game.
“I know the expectations of the team, the expectations of the players. I think they gave their all but, unfortunately, it was never meant to be.
“But, at the end of the day, it’s all about the coach. When you are a coach, you need to look at yourself and I really need to look at myself critically and review my position.
“You feel the club deserves more and better. When you look at yourself and you see your effort is not matching the expectations, you feel there could be someone out there who could take the team further.”