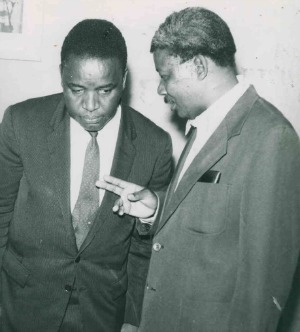 FORTY years on and Zimbabweans and Zambians are still asking – Who killed Herbert Chitepo?’
FORTY years ago on the morning of March 18, 1975, Herbert Chitepo who was a key leader of the Rhodesian liberation movement ZANU, was blown to pieces after a bomb planted underneath his pale blue Volkswagen Beetle exploded outside his home in Lusaka.
The murder of Chitepo happened during one of the darkest period of Zimbabwe liberation politics.
In November 1974, a rebel group within ZANU led by Thomas Nhari, attempted to depose the movement’s High Command headed by Josiah Tongogara, a key military figure in the fight against white rule in Rhodesia.
Tongogara was a member of the Karanga clan of the majority Shona tribe in Rhodesia. The Nhari Rebellion was squashed, thanks to a large number of troops loyal to Tongogara arriving in Zambia from Tanzania. Chitepo, from the Manyika clan of the Shonas, was asked to sign the death warrants of over 200 young freedom fighters whose main complaint had been about poor quality weaponry, irregular pay and awful food. They said that their leaders lived in a luxury in Lusaka and other African capital cities.
At the start of 1975, Chitepo was in a state of severe depression. His few close friends said that he was drinking heavily. He was despondent about growing inter-ethnic rivalries in the movement. But he didn’t give up easily. He was resilient. As a boy he had gone barefoot to school and overcame every obstacle to qualify as a barrister in England. But in Rhodesia be encountered European privilege and African anger. “I saw him gradually change from being a person of goodwill who wanted to make partnership work, to a bitter anti-white extremist,” wrote the former Anglican Dean of Johannesburg, Gonville ffrench-Beytagh in his book “Encountering Darkness” (Collins, 1973).
Chitepo was also a strong critic of the détente exercise launched in 1974 by Zambia’s President Kenneth Kaunda and South Africa’s Prime Minister, John Vorster. He argued it was not the time to talk to diehard whites in Salisbury, basing his argument on the propitious conditions for revolution signalled by the coup d’etat in Portugal and the imminent independence of Mozambique that year.
Kaunda was determined to move ahead and was furious about divisions within the liberation movements that had cost his young country so dearly since its independence in October 1964. His aim was to unite the main African freedom parties and put them under the control of the Methodist cleric, Bishop Abel Muzorewa, who was more familiar with the weight of prayers books and Bibles than AK47s. Kaunda and Vorster supposed that under a single command, the warring movements could thrash out their disagreements with Ian Smith and lay plans for majority rule in Rhodesia. Chitepo asserted there could be only one way to end white rule in Rhodesia – the military way.Advertisement