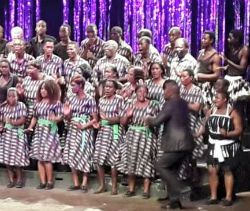 INTERNATIONALLY acclaimed choral group Chitungwiza Harmony Singers are expected to fly the country’s flag high at the Tenth International Choral Festival July 2016 in Missoula, Montana USA after the organisers extended an invite to the group.
The choir has previously participated at other fiestas such as the Edinburgh Festival in Scotland.
The 60 member group, fresh from conquering nine Southern Africa choirs last month where they won the South Africa Old Mutual Choral competition for the fifth time, has since accepted the invitation and looking forward to perform at the non-competitive showcase event.
International Choral Festival Artist Director David Heidel said the event’s mission is to foster goodwill and to promote universal understanding through choral music.
“Every three years, select world-class choirs are invited from around the globe to the beautiful mountain town of Missoula to share in public concerts, social activities and sightseeing opportunities,” reads part of the invitation letter.
“International choirs are housed in pairs with local host families and the host families will transport the choirs to the concert venues and social events during Festival week and also provide them with all breakfasts, most lunches and dinners.”
Chitungwiza Harmony Singers are expected to perform four to five times for twenty to thirty minutes and in variety of venues around Missoula during the Festival week.