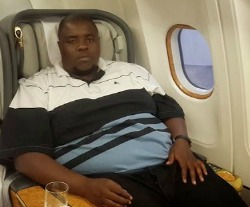 CONTROVERSIAL businessman Wicknell Chivayo says he will settle Highlanders’ fine, which the club was handed by the Premier Soccer League (PSL) following the abandonment of a match they played against Dynamos at Barbourfields Stadium a month ago.
The Bulawayo-based football team was found guilty after their fans caused the match to be abandoned following suspected poor officiating.
The fans got angry when the referee allowed a Dynamos equaliser which they thought was scored from an offside position.
However after the PSL disciplinary committee sat to decide on the issue, Bosso lost the game on a 3-0 score line and was fined $4 000 which shall be paid by 31 July 2017.
On another other issue, Highlanders were, this week, found not guilty after their game against FC Platinum was abandoned. However the club was slapped with another $2 000 fine after the PSL ruled that their fans threw in missiles.
However Chivayo has come to Bulawayo giants’ rescue.
“I was speaking to our respectable highlanders Chairman Modern Ngwenya over the weekend. I was so impressed by his sentiments that soccer results are determined in football grounds not in board rooms ….I assured him that on his instruction simply by text or phone call I will definitely go and pay the 4000 dollars fine to PSL with my eyes closed.
“I told him I will do them a favour and go in person myself and pay it in cash so that they can get a chance to also meet one of HIGHLANDERS life time supporters who DON’T CONDONE VIOLENCE….ENOUGH SAID and to cut a long story short ASIFUNI BUMBULU… (We do not want nonsense)…,” wrote Chivayo on his Facebook page.
After the ruling on the Dembare game, Dynamos climbed to fifth position on 20 points-the same with their rivals Highlanders separated only by a goal difference.
Advertisement