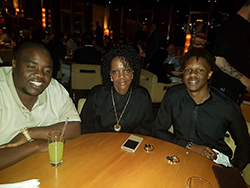 HARARE businessman Wicknell Chivhayo has distanced himself from Grace Mugabe as the jailbird entrepreneur feels the hit under the new dispensation which is putting allies to the former first family under pressure.
The show-off tycoon ran a mile from the fallen Grace Mugabe while appearing before a legislative oversight committee on Monday.
Chivhayo was thought to be close to the Mugabes and appeared to confirm the speculation by flaunting on social media photographs showing him apparently on holiday with Grace in Dubai.
The social media boasts reinforced suspicions that that Chivayo was winning multi-million-dollar public tenders because of his proximity to the wife of Zimbabwe’s long serving president Robert Mugabe.
On Monday Magwegwe opposition legislator Anele Ndebele asked directly whether the Gwanda tender was awarded because of the Mugabe ties, considering that Chivayo’s company had no experience in the area and was barely a year old at the time.
“Allow me Mr Chair to tease out if the gentleman is related to the former first family and if that relationship didn’t give him a foot in the dough,” said Ndebele when Chivhayo appeared before the energy committee.
Mberengwa North Zanu PF legislator Tafanana Zhou weighed in saying, “Most of the time he (Chivayo) was on social media after the contract was awarded.
“He was looking for influential people including the first family. We don’t know when he posted (the Grace images); was he trying to show that he has so much power and untouchable?
Responding, Chivhayo denied the ousted Mugabes aided his business interests but refused to describe the nature of their relationship.
“I am not related to the former first family and at no given time did they interfere or assist me,” said Chivhayo.
“Tenders are awarded by the state procumbent board, the first family does not and has no influence whatsoever in my respective view to the operations of the state procurement board.”
Following various media exposes and a change in government, Chivhayo’s solar tender project is now under investigation and being audited by auditor general Mildred Chiri.Advertisement