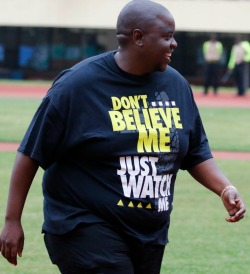 THE victorious Warriors are set to share a whopping $250 000 as reward for qualifying to the 2017 African Cup of Nations finals to be staged in January next year.
Zifa benefactor Wicknell Chivhayo dangled the $250 000 carrot to the Warriors in the event that they qualified for the continent’s biggest football showpiece.
Chivhayo was at the National Sports Stadium on Sunday as the Warriors thrashed Malawi 3-0 to secure a berth at the finals.
The controversial Harare business man said he will fulfill his promise. “Like I have said, the Warriors wiĺl get their money for qualifying to Gabon. The position remains the same; nothing has changed,” he said.
With Swaziland overcoming Guinea 1-0  in Mbabane, it meant the  Warriors joined the party in Gabon with a game to spare thus rendering the Warriors next match against Guinea in Conakry on September 3 dead rubber.
This is because even if Swaziland beat Malawi in their last match they can only take their points tally to 11-the same as the Warriors who now top Group L.
With the qualifiers set to be decided on head to head, the Warriors, who drew1-1 against Swaziland before walloping them 4-0 in Harare on Easter Monday, booked their seats at the African Nations Cup table.
After a sluggish start Knowledge Musona thrust Zimbabwe into the lead after winning and converting a penalty in 15 minutes before Khama Billiat added the second with a cheeky goal on.
Substitute Cuthbert Malajila then scored the insurance goal at the stroke of full time, planting a firm header off a cross from Knowledge Musona.
The Warriors last qualified for the African Cup of Nations exactly 10 years ago in 2006 when Charles Mhlauri took them to Egypt. Sunday Chidzambwa had led them to Tunisia two years earlier.
Now Kalisto Pasuwa becomes the third coach to qualify Zimbabwe to the biennial soccer showcase.Advertisement