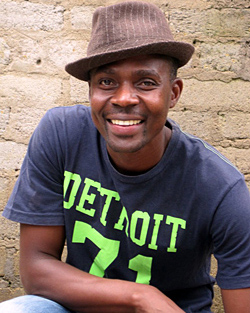 IT’S been 10 years since the Ontario-based ZimArt and Beaconsfield collaborated on the first Shona d’Afrique outdoor exhibition at Centennial Park.
To mark the occasion ZimArt director and Shona d’Afrique curator Fran Fearnley is donating a large-scale sculpture by Zimbabwean artist Tinei Mashaya.
The unveiling of the 2.73-metre piece, entitled Loving Each Other, takes place at Centennial Park on Friday, July 11, at 10 a.m.
Mashaya sculpted the piece by hand out of dense springstone, a preferred material for Shona artists.
“It’s a semi-abstract piece which I think interprets in a broad sense the bond which has been created between Beaconsfield and the Zimbabwean artists over the years,” Fearnley said.
The Shona stone sculpture movement began to flourish in Zimbabwe in the second half of the 20th century. It is modern in its approach, but often traditional in theme.
Fearnley has run ZimArt and the Rice Lake Gallery, located in Bailieboro, Ont., since 2000.
Every year she invites a Zimbabwean artist for a three-month residency, which includes a visit to Beaconsfield to be artist-in-residence for the Shona d’Afrique exhibition.
Fearnley said the visit to both Ontario and Quebec expands the artist’s cultural experience while in Canada.
This year’s Shona d’Afrique artist-in-residence is Vengai Chiwawa. The artist has been invited to give workshops throughout Europe and his work can be found in galleries in Canada, the United States and Europe.
He will be sculpting in the park for the duration of the exhibition, which runs from July 12-20, and will field questions from the public.
The route to Fearnley’s now full-time job as curator of Zimbabwean art was a circuitous one.
She fell in love with the stone sculptures while volunteering in Africa in the late 1990s, but had never thought of curating or exhibiting until a friend’s attempt to mount an exhibition of Shona art in Washington fell through.
The challenges involved in safely transporting, displaying and lighting the hefty sculptures were overwhelming.
So Fearnley had the pieces shipped to her property in Bailieboro. She mounted what she thought would be a one-time exhibition, but the response to the pieces was so strong, she organized another.Advertisement

She now spends up to three months a year in Zimbabwe checking out new and established artists she would like to represent and then comes home to organize exhibitions.
For three years, Fearnley came to Clef des Champs in Val David to mount exhibitions, but when the gardens closed for expansion, she asked a friend for advice and he suggested she tried a park in the West Island.
Centennial Park’s location on the banks of Lake St-Louis charmed her
“Shona sculpture should be displayed outdoors,” Fearnley said. “The stone is very resilient and can handle Canadian winters.”
The unveiling of Tinei Mashaya’s Loving Each Other is at Centennial Park, July 11 at 10 a.m.
To learn more about ZimArt and the Rice Lake Gallery, visit www.zimart.ca.
This article was first published by the West Island Gazette.