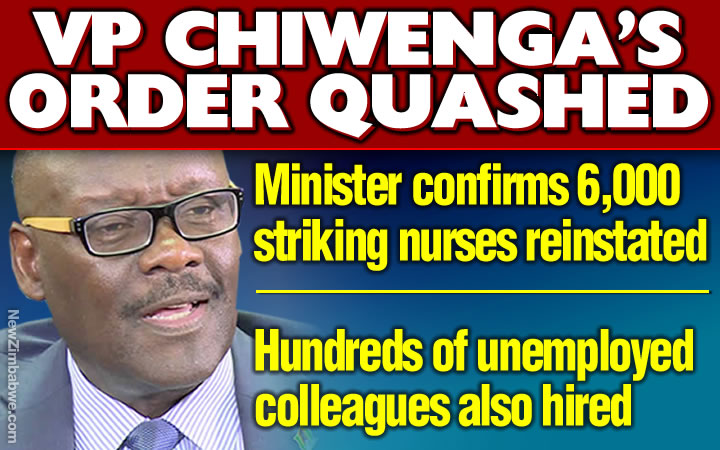 NURSES have scored a major victory with the government hiring a number of unemployed colleagues and reversing dismissal letters of almost 6‚000 others that were fired after downing tools.

A fortnight ago thousands of nurses in government institutions went on a strike that effectively crippled the health sector‚ resulting in Vice President Constantino Chiwenga adopting a hard-line stance and deciding to dismiss them.

On Monday the government accepted all the nurses back and it was business as usual again‚ despite a pending urgent court application by nurses challenging their dismissal.

“The industrial action in which 5,974 nurses withdrew their services ended (Sunday) 22 April 2018,” said the minister.

“The majority of nurses who were dismissed have since reapplied for re-engagement and government has permitted them to resume duty pending final approval from the employer.

“Services in our hospitals have since returned to normal utilising those nurses who did not participate in the industrial action beefed up by the recruitment of qualified nurses who were not in employment as well as nurses below 70 years who were retired.

“In addition, all nurses who were on leave were recalled to duty.”

“We are happy that nurses have been taken back unconditionally because their grievances are valid‚” said the union’s secretary general Enock Dongo.

Parirenyatwa said the “government is urgently looking into the outstanding cross cutting issues/challenges and will resolve them as soon as possible”.

“It is regrettable and unfortunate that the nurse fraternity chose to down tools when government was seriously addressing the issues that nurses and other health profession categories had raised in terms of allowances.”

Meanwhile, the hiring new nurses meant that there was an increase in the staff complement at the country’s public health institutions.

However, this does not alter the fact that nurses needed to get what was due to them.

“We still need what’s due to us because‚ even if there are numbers in hospital‚ it’s hopeless when it’s a de-motivated lot with poor working conditions‚” said Dongo.

Last year health minister Dr David Parirenyatwa said the current nurse staffing complement (16‚000) was equal to levels in 1980 at independence when the country’s population was estimated to be a little over 7 million.

A 2012 census put the country’s population at 13 million at a time when the government had frozen the hiring of nurses because it was faced with a mirage of economic problems that led to a brain drain and hospitals failure to provide basic healthcare.

Figures from the Health Services Board (HSB) indicate that to operate at a basic level‚ government should effectively hire 8‚000 nurses.

To address the shortage‚ government hospitals last year resorted to offering their nurses locum jobs‚ paying by the hour whenever they were off duty.

Sources revealed that on average‚ a thousand nurses graduated annually‚ and that using them to replace experienced ones was impossible. There were also fewer than 3‚000 jobless nurses.

“You can’t take away years of experience and replace it with people who last worked as students. Even so‚ the country reduced nurses’ training drastically in 2011‚ such that those without jobs won’t even make up half of those that would have been fired‚” said the source.

Anytime soon‚ the government is expected to disburse $17-million dollars in outstanding allowances to nurses.

“We expect them to give us the money because it’s money owed to us. We worked for it. It’s not like we are saying they should pay for what we are yet to work for‚” Dongo said.