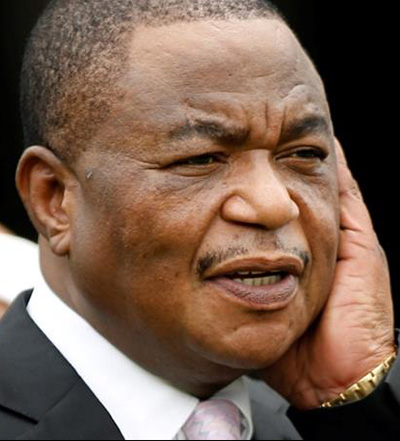 VICE President Constantino Chiwenga was reportedly rushed to hospital at the weekend after a fresh health scare.

Chiwenga’s motorcade was seen late Sunday, at a private hospital in Harare but insiders said he was not detained.

“He went home after a short check-up. He is not well and needed to be checked by doctors,” NewZimbabwe.com heard.

The former Commander Defence Forces who engineered the coup that toppled former President Robert Mugabe and paved the way for President Emmerson Mnangagwa’s rise to power, has struggled with his health since then. Chiwenga has shown signs of irritation in public and at some point had to be airlifted to South Africa, before being flown to India early this year.

Information Ministry permanent secretary Nick Mangwana initially referred question to presidential spokesperson George Charamba who was not immediately available for comment, as his mobile either went unanswered or he dropped calls.

Mangwana would only say: “All I know is that VP Chiwenga is the Acting President.”

New Zimbabwe.com however has it on good authority that Chiwenga was whisked to hospital after his condition “deteriorated” with indications he could soon be flown out of the country again.

In early February Chiwenga was taken ill to South African hospital for emergency medical treatment, after his health had taken a nose-dive during a politburo meeting at the Zanu PF headquarters in Harare.

As was the case at the weekend Chiwenga then checked in at the elite private Avenues Clinic in the capital before he was later airlifted to a hospital in Cape Town triggering demonstration by Zimbabweans at the time angry at government’s negligence with local facilities.

Medical practitioners then had downed tool demanding better working conditions but Chiwenga had threatened to fire all of them.

Government, in October last year, said the VP was being treated for “exhaustion” and 1980s injuries from the war of liberation.

Chiwenga and his wife, Marry, have been showing signs of illness, with visibly swollen hands and discoloured skin patches, something he said was due to poisoning in the aftermath of the November 2017 coup.

He on one occasion at an official event appeared agitated and angrily fidgety.

Last year, Chiwenga suggested he was paying the price for removing Mugabe, triggering speculation he might have been poisoned sending government into panic.

President Emmerson Mnangagwa is currently in South Africa attending a Sadc Solidarity meeting on Western Sahara the only country on the continent still under colonial rule, ironically with Morocco as master.

The North African country was recently admitted back into the African Union after years of suspension over the issue.