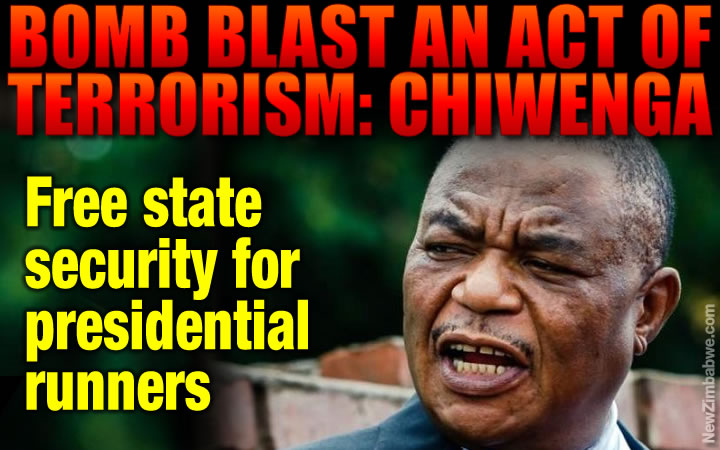 THE bomb blast which rocked a Zanu PF rally Saturday leaving more than40 party leaders injured was an “act of terror” and government will provide security to any candidate who feels “afraid and scared”, VP, Constantino Chiwenga, said Sunday.

He was addressing a rally in Chitungwiza where he vowed that the blast that went off in a VIP tent seconds after President Emmerson Mnangagwa stepped into it will not stop the July 30 election.

While Mnangagwa was unscathed, Chiwenga was lightly bruised.

During the Sunday rally, Chiwenga said all Zanu PF rallies were going to go ahead as scheduled.

He then said all those candidates who may fear to carry on with their campaigns will be given security adding that the police will hunt down and bring to book the perpetrators. He said government will not be deterred by the act of terror.

“Every political party wants free, fair and peaceful elections but there might be some elements who might want something else. Yes I would say this attempt was designed to undermine peaceful elections, and one lesson from the incident is the need for security for all candidates. The state has an obligation to provide security political players, especially presidential candidates,” he was quoted saying.

Normally, government does not provide Presidential candidates with security by the government and, according to Associated Press protection at Chiwenga’s rally appeared “no heavier than normal, with no security checks for those attending”.