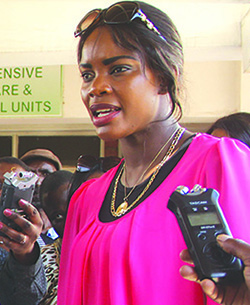 ORDINARY Zimbabweans have reacted angrily after being “priced out” of this year’s Miss Zimbabwe pageant finals with cheapest ticket is pegged at US$300,00 per head.
Those who can’t afford the tickets have been told they can watch the event live on Zimbabwe Broadcasting Corporation Television (ZBCTV), which is notorious for poor programming quality.
This year’s finals will be Saturday at Mabvazuva Village (formerly Caravan Park) in Msasa, Harare, with 15 models fighting it out for the title.
However, pageant fans who spoke to NewZimbabwe.com said since Mary Chiwenga, wife of Zimbabwe Defence Forces Commander Constantine Chiwenga, took over as Miss Zimbabwe Trust’s chairperson the event has effectively become exclusive to the elite and wealthy.
“The event is now for those acquiring wealth by corrupt means because no ordinary Zimbabwean can afford to pay that amount in a country where the majority are surviving on less than a dollar a day.
“Look at the salaries that civil servants are taking home.; they might as well change the name to Miss Zim Wealthy,” said Gift Mabheka Njanji.
Chiwenga, a former model, said the pageant was going to be a classy black tie event attended strictly by invitation.
The decision to limit the event to inviting guests came was aimed at keeping out rowdy revellers who usually hurl insults at the contesting girls.
“They (elite and rich Zimbabweans) are selecting themselves to attend the event so that they get involved with these innocent young girls as their small houses. Who do they want to fool?” added Gladys Munemo.
“To make matters worse the tickets are said to be for selected individuals and how do they choose these individuals?
“We know who they are. They say we can watch the pageant on TV but are they going to make sure that there will be no load shedding on the day?” asked Bridget Sibanda.
Chiwenga was quoted in the local media saying only those she feels add value to the pageant would attend the function.
Environment minister Saviour Kasukuwere will be the guest of honour at this year’s pageant which will be held under the theme “Taking Zim-Asset to Greater Heights.”
Chiwenga also said there was no role for reigning Miss Zimbabwe Bongani Dhlakama who won the pageant when it was last held in 2012.Advertisement

“There is no reigning Miss Zimbabwe as it stands since the country last held the pageant in 2012 meaning the winner’s term expired in 2013,” she said.
“Whatever Dhlakama will be doing, it must be well-known that she is not representing the face of Miss Zimbabwe.
“It was not our obligation to look for Dhlakama as we had invited everyone who was interested in participating and it seems as if Dhlakama was not interested and never turned up having heard about the event.”