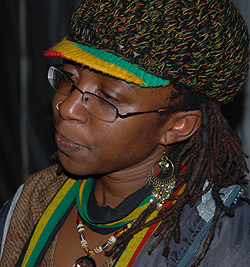 CELEBRATED mbira musician Chiwoniso Maraire, who succumbed to a chest infection on Thursday, will be buried at her rural home in Chakohwa Village in Mutambara, Manicaland, on Monday.
A close friend to the late mbira queen, Chido Musasiwa, said there would also be a funeral service at Cell Funeral on Sunday morning before mourners proceed to her rural home for burial 24 hours later.
“Her daughter, Chengeto, is expected to arrive on Monday morning from her United States base,” Musasiwa said.
Musasiwa added: “After the service, the body is expected to pass through her family home, 19 Campbeltown Road, Bluff Hill, in Harare, for about an hour before proceeding to Chakowa.”
Chiwoniso, who was born in 1976, was the daughter of renowned Zimbabwean mbira player and teacher Dumisani Maraire who was a lecturer at Washington University in the US.
She returned to Zimbabwe at the age of 15 with her family and attended Mutare Girls’ High School for Forms 3 and 4, before taking Advanced Level evening classes at the University of Zimbabwe where her father was teaching.
Chiwoniso performed with her father’s marimba groups, Dumi and Minanzi and Mhuri yaMaraire, before meeting two young hip-hop artistes Herbert Schwamborn and Tony Chihota with whom she formed Zimbabwe’s first Afro hip-hop group, Peace of Ebony, in 1991.
They recorded an album From The Native Tongue in 1992 in Keith Farquharson’s studio, with Farquharson contributing much of the music and production.
Chiwoniso is survived by daughters Chengeto, 16, and Chiedza, 13, whom she had with another late music giant Andy Brown.Advertisement