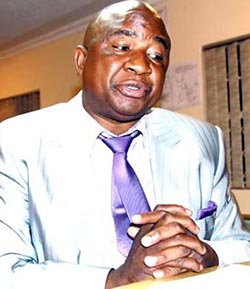 THE Super Eagles of Nigeria have requested an international friendly match with the Warriors as part of their preparations for the 2018 World Cup qualifiers, according to ZIFA boss, Philip Chiyangwa.
On the other hand, the Warriors also want to use the friendly match as a dress rehearsal for the 2017 African Cup of Nations finals to be held in Gabon.
Zimbabwe qualified for the biennial soccer showcase with a game to spare after beating the Flames of Malawi in Harare in June.
The Super Eagles, African champions in 2013, no longer have interest in the African Cup of Nations (Afcon) after they were surprisingly booted out of the January tournament.
But they could still make up for that disappointment by booking a place at the world cup in Russia in 2018. They had requested an international friendly against Zimbabwe in Nigeria during the just ended international break as part of their preparations for the upcoming world cup qualifiers next month.
The match, however, failed to materialise as cash strapped ZIFA operating on a shoe string budget, also wanted a commitment from Nigeria that they would also come to Harare for the return leg where they would also benefit from gate takings to enable them to pay the players.
According to Chiyangwa, many African countries, including Ghana and Cameroon, were also keen to play the Warriors in international friendly matches. He, however, pointed to the issue of funding as the biggest challenge they were facing in a harsh economic environment obtaining in the country.
ZIFA is also struggling to secure corporate sponsorship to bankroll the team.
“The question of teams that we can play is not the issue really. There are so many teams that are willing to play us. Nigeria wanted us to pass through and play them soon after our match against Guinea. But because we also need to pay players, I asked when are we going to have the return match but they could not clarify. We need a situation whereby they would also come here for a return match so that we will be able to pay players from gate takings. But that match is still pending,” said the ZIFA boss.
Chiyangwa is also set to negotiate an international friendly with former African Champions Egypt when he leaves for the Caf AGM in Cairo at the end of the month.Advertisement

There are genuine fears though, that the Warriors might not be able to prepare adequately for the January tournament as they are unlikely to secure international friendlies as nearly all the teams will be tied up to their World Cup qualifiers during the remaining two international breaks in October and November.
Zimbabwe will be the Southern Africa’s sole representative at the tournament as they were the only team from the region to secure a place at the finals after topping Group L with 11 points in a memorable campaign in which they lost just once to Guinea last Sunday, narrowly missing out on becoming one of the two teams to qualify with a 100% record.
Ivory Coast is the only team that qualified for the biennial soccer show case without a defeat.
Kalisto Pasuwa’s men are among the lowest-ranked teams on the list of the qualified teams. They will be in Pot D when the draw, scheduled for October 19 in Gabon, is conducted, implying they would be drawn against the giants of African football who have all made it save for Nigeria.