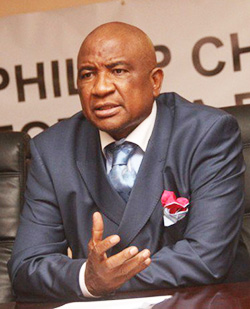 ZIFA president Philip Chiyangwa has issued a warning to referees as he condemned bias and corruption by match officials.
Chiyangwa was speaking at a press conference in Harare Monday after meeting local match officials in the capital where he also made appointments to the new referees committee.
The Harare businessman said he would chair the committee, deputised by former Fifa and Caf referee Gladmore Muzambi.
Chiyangwa said he decided to chair the referee’s committee following numerous complaints about the way referees handled football matches.
He said he could have asked Muzambi also a previous ZIFA board member for finance to chair the committee but had not known much about Muzambi until recently.
“Muzambi is a very experienced referee and a senior internal auditor in government,” said the Zifa boss.
“He came tops in our vetting after his name was proffered by many people. I didn’t know him personally until recently. I could have asked him to chair this committee if I had known him before.
“But I now chair the referees committee with Muzambi as my deputy. He is responsible for deployment of the referees.”
Corruption warning
Chiyangwa warned referees that if they engage in corruption, the “long arm of the law would catch up with them”.
“So, you as referees, you are the major managers of people’s peace and stability. You should be responsible when taking care of business. If you come to stadiums with pre-conceived ideas, then you will be in trouble.
“You will not officiate again, let alone entering the stadium. You will only watch football from television. Referees are not assemblers of violence.
“Because you have this onerous responsibility of managing peace and stability you should execute your duties professionally and without bias.
Chiyangwa continued: “I have heard of monies that have been exchanged prior to games and I am saying never ever get yourself caught up in this sort of things.
“Fifa has asked us to set up a security section that will be solely responsible for the performance of the referees and they are even paying for it.
“I deploy you every week and I don’t want to have my decisions queried because of your poor officiating. Remember, you’re governed by Caf and if you prove you are good they will recommend you and appointed to take charge of continental and world cup matches. Advertisement

“We are going to take drastic action with respect to those to those who perpetrated violence against the police or the public in general. I have instructed my team that side to procure photographs for us that shows who was doing what.
“I can see from video clips sent to me that there were police officers with their dogs on the pitch and people started throwing missiles, pushing them away from the stadium. So we want to find out who they are before we take action.”