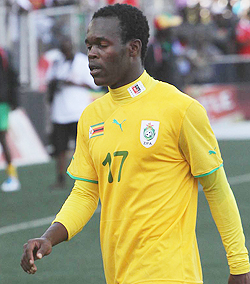 ZIFA president Philip Chiyangwa warned the Warriors players against getting involved in match fixing saying it would end their careers.
Addressing the team after their morning training session at the National Sports Stadium on Wednesday, Chiyangwa, who was flanked by minister of Sport and Recreation (SRC) Makhosini Hlongwane, urged players to report any advances made to them over match-fixing.
“I am sure you have heard there were reports of an attempt to fix your upcoming matches against Swaziland,” said the ZIFA boss.
“I want to urge you that you should report to us if you are approached by anyone over match fixing. This is not good for your careers.
“What we want from you is to play for your country and win. I am confident the squad the coach has picked can go and win in Swaziland.
“Khama Billiat we don’t want you to play good football for your club Mamelodi Sundowns only but you should also do that for your national team.
“I am going to do something for you so that you are motivated and you enjoy your game.”
Team captain Willard Katsande thanked the Zifa president for his support.
“I would like to thank the president and the minister, on behalf of the team, for their words of wisdom. It’s now up to us the players to go there and defend our country.
“We will go there and try to collect maximum points,” said Katsande.
All the players except China-based Nyasha Mushekwi took part in the morning training session at the National Sports Stadium.
Mushekwi however, arrived in the morning but team manager Shariff Mussa said he was still sorting out personal issues and was expected to travel with the rest of the team on Thursday.
The Warriors are scheduled to fly out for Swaziland this morning via South Africa where they would connect to Swaziland by road.
The match has been set for Friday with the reverse fixture at the National Sports Stadium in Harare three days later on Easter Monday.
Zimbabwe and Swaziland share top spot in Group L with four points each after two matches of the campaign which leaves the group delicately balanced.
Zimbabwe beat Malawi 2-1 away before drawing 1-1 with Guinea while Swaziland beat Guinea 2-1 away and then drew 2-2 against Malawi.Advertisement