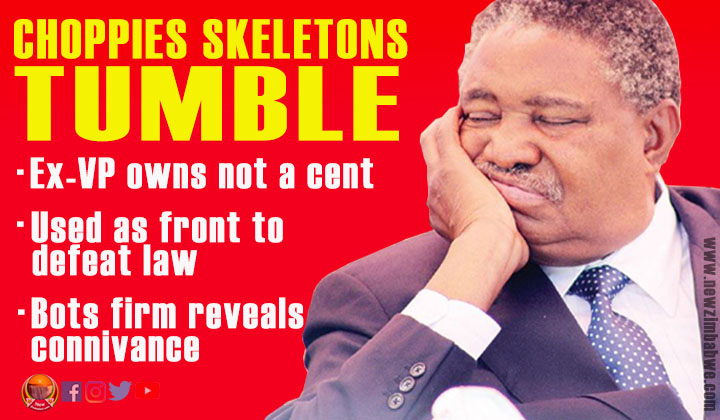 A BOTSWANA company currently involved in a fierce ownership tussle for retail chain store, Choppies, has made shocking revelations on how former Vice President Phelekezela Mphoko was both bribed and used as a front to defeat the country’s indigenisation law that forbade foreigners from anything in excess of 49 percent ownership of firms operating in Zimbabwe.

Until recently, Mphoko and his family have been known as owners of the retail giant which was erroneously targeted for acts of looting by some Zimbabweans who were disgruntled with their government.

The Mphokos have been said to be controlling the 51% stake in the company with their Botswana partners owning the remainder.

President Emmerson Mnangagwa’s new government has since scrapped the indigenisation law in what could have prompted Choppies to revise its purpoted ownership structure with the Mphokos.

The move has opened a can of worms, a development that has also triggered a fierce legal battle for ownership of the company by the Mphokos and their Botswana partners.

But the frightening part has been revelations of how Mphoko, as VP, became party to a process that was aimed at defeating the country’s laws.

The shock revelations are contained in a self-incriminating letter copied to Zimbabwean media by Botswana based Choppies Enterprises Limited CEO, Ramachandran Ottapathu.

Ottapathu says the Mphokos owned no cent in the company that operates 34 shops in Zimbabwe and has close to 2000 in its employ.

Reads the letter, “As a matter of fact, Dear Editor, we would like to state again, for your understanding Sir/Madam that CHOPPIES OPERATIONS IN ZIMBABWE ARE OWNED, IN THE MAIN, BY CHOPPIES ENTERPRISES LIMITED, A COMPANY REGISTERED IN BOTSWANA.

“The reference of 51% being owned by Mphokos was done so as to comply with the legislation which was put in place by the government which precluded foreigners from owning big stakes in business in preference to locals. That legislation is being looked at as we write to you because of the vision that the government has to open up the business sector and promote investment.

“What we did as Choppies is nothing else than answer the Zimbabwean government’s call to come and invest in Zimbabwe.”

The company said it has enough proof to counter Mphoko’s claims they were the real owners of the business while basing on paperwork that was written to disguise the excessive foreign share of the business.

“We have documentation to prove that we are the ones who brought in $25 million from Barclays Bank of Botswana, the underwriters of the funding, for the setting up of Choppies operations in Zimbabwe,” said Ottapathu.

“We also reiterate that Mphokos were given the 51% shares in an agreement which allows us to buy back the shares as and whenever we want as part of efforts to comply with the law. Mphokos NEVER invested any cent in the business. We gave them the shares on paper. Their 7% free carry shares was a way of thanking them for facilitating that we set up business in Zimbabwe.

According to the shareholder agreement that was signed to facilitate the setting up of the business under Zimbabwean law at the time, said Ottapathu, the 44% shares can be called back at any minute at no cost to Choppies Enterprises, thus leaving Mphokos with their 7% share.

He continued, “The 7% free carry share can be bought back by Choppies Enterprises at US$1 per share in the event that we want Mphokos out of the business altogether. We have not yet reached that stage yet.

“For the record, Siqokoqela Mphoko and his father, who are shareholders of Nanavac, have all along been getting dividends through their bank account for the 7% shares they hold and not 51%.”

The Botswana firm says it has proof of transfer which it was prepared to furnish to the media.

“We are, however aware, of machinations by those that seek to portray themselves as victims and saints to wrestle the Choppies Enterprises from its owners, the people of Botswana. They have tried to rewrite the Choppies story and we will not be party to that attempt.

“The partners know the truth and some are now trying to take advantage of the situation to twist facts in their favour.

“All the important and crucial stakeholders know who holds what percentage in the company. They also know who invested what. They have documents that talk to these issues.”

Ottapathu said Mphoko’s Botswana partners were disturbed the embattled former VP and his family were battling to wrest control of the company.

“We are however disturbed when mature people now want to change facts and maintain they own the enterprise.”

He adds, “We firmly believe that our partners should desist from greed and respect the tenets of the agreement that we made and committed ourselves to at the initial stages.

“All this drama is not worth the energy that they have put into it. We would rather have the energy being devoted to the growth of the business.”

The revelations come after Siqokoqela, director of Nanavac Investments (Private) Limited, a local partner for the Botswana-registered Choppies Distribution Centre (Proprietary) Limited, has been accused of abusing his power to “loot” cash realised from sales at different supermarkets and replacing it with transfers.

The two, according to the foreign investors, are using threats of deportation against Choppies employees.

This happens triggered the seeking of the court’s intervention to bar the family from interfering with the retail business’ operations.

Choppies wants the family barred from taking money from the business and harassing workers.