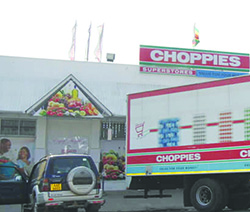 A LEADING local retailer says Zimbabwe’s cooking oil producers are failing to meet market demand, driving the continued reliance on imports from the region.
Zimbabwe has four oil producing firms — ETG Parrogate, Surface Investments, Olivine and United Refineries whose combined production of 10,500 metric tonnes comes short of the country’s monthly requirement of 11,500 metric tonnes.
Imports of cooking oil have over the past years contributed heavily to the country’s bill, with $41 million worth of edible oils being imported in 2014. This year between January and June close to $19 million has been spent on importing cooking oil.
In August Government raised customs duty for cooking oil to 40 percent and a 25 percent Surtax or $0,50 per litre, whichever is higher in a move aimed at deterring importation of the edible oils but a director of the local unit of Botswana retailer, Choppies,  Siqokoqela Mphoko told The Source on Friday that retailers had to rely on imports as producers were failing to meet demand.
“When we started about two years ago we were importing about 90 percent of our products but now  we have more than 75 percent coming from the local market serve for a few products we have a challenge with such as cooking oil and soap. I think most of the refineries cannot cope with demand,” said Mphoko.
In an August interview Confederation of Zimbabwean Industries (CZI) president Busisa Moyo told The Source that capacity utilization in the sector was above 70 percent and that local production would surpass demand by September, ruling out the need for imports.
Moyo was today not available to comment.
Choppies entered the local market by buying Bulawayo-based businessman Raj Modi’s investment company, Modi Enterprises, for $21,2 million and taking over 11 of the outlets that were operating under the Aaro Mart and Spar franchises in Bulawayo in 2013. It now has 24 retail outlets in Zimbabwe.Advertisement